Garden Not So Rosy Since Flowers Faded 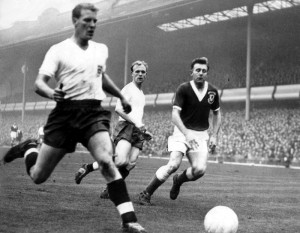 Ron Flowers and Wolverhampton-born Don Howe in action for England against Wales at VIlla Park in 1958.

Little could Ron Flowers have known of the large void that was to follow when he trooped dejectedly off following England’s 5-2 European Nations Cup defeat in Paris in Alf Ramsey’s first competitive game in charge.

Come August, it will be 50 seasons since Wolves have provided a player who actually kicked a ball for the home country in the tournament proper.

Flowers faced the French on February 27, 1963, when the Euros were not only under a different name but also a very different format. The competition was staged as a knock-out all the way through with matches played over two legs up to and including the quarter-final.

Twenty-eight teams entered, although Greece withdrew when drawn against Albania. Austria, the Soviets and Luxembourg received byes, the latter subsequently emerging as giant-killers when they beat Holland 3-2 on aggregate and then lost by the odd goal in a replay against Denmark.

England’s home meeting with France in October, 1962, was highly notable around Molineux. The 1-1 draw at Hillsborough was marked by a successful Flowers penalty (his tenth and final goal for the country) and the senior international debuts of Wolves forwards Chris Crowe and Alan Hinton.

Not that the duo particularly kicked on at that level. Crowe didn’t win another cap and Hinton, although destined to play a further twice, was replaced at outside-left for the next game by Mike O’Grady, the Huddersfield player who scored twice on his debut (against Northern Ireland in Belfast) and who would move to Wolves from Leeds in 1969.

Flowers was the only Wolves man in the line-up for the return in Paris, where he had made his senior international debut in a friendly eight years earlier in a side also containing Bert Williams, Billy Wright and Dennis Wilshaw.

Bobby Smith and Bobby Tambling scored in England’s sobering 1963 defeat, which put them out 6-3 on aggregate and left Ramsey with much to do if he was to live up to his prediction that he could lead the side to glory in the 1966 World Cup finals.

The Nations Cup moved on in our absence in the meantime to Spain for its final stages. The hosts beat Hungary 2-1 in one semi while the Soviet Union overpowered Denmark 3-0 in the other.

In the final, which was refereed by Englishman Arthur Holland, Spain edged out the defending inaugural champions 2-1 in Madrid thanks to a deciding goal in extra-time. 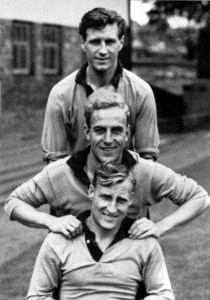 The days when England internationals at Molineux were plentiful. From top: Jimmy Mullen, Billy Wright and Bert Williams.

Spain had pulled out of the tournament in 1960 rather than face the same opponents but General Franco approved of his nation’s footballers playing them two or three years on.

The only other player to have played for England in the European Championships while with Wolves is Steve Bull, although his appearance against Poland at Wembley in the autumn of 1990 (the last of his 13 caps) was only in group qualifying.

* Wayne Rooney has seen to it this month that a claim to fame at Molineux is no more. ITV commentator Clive Tyldesley recently reminded us that the last time England had beaten a host nation in the finals of a major tournament, the goals came from Wolves pair Wilshaw and Jimmy Mullen. That victory was during the 1954 World Cup in Switzerland. But Rooney’s header in Kiev nine days ago put out co-hosts Ukraine.