A Fond Meeting 40 Years On 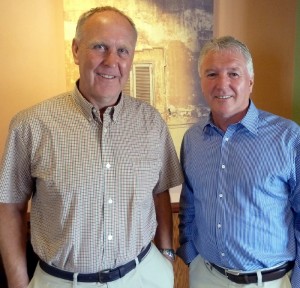 Graham Hawkins has had a first meeting in decades with a former Molineux colleague as he prepares to take centre stage at another of his old clubs.

Hawkins hosts a charity dinner at Shrewsbury Town tomorrow night and slipped into the mood for nostalgia when Wolves Heroes lined up a coffee-shop reunion in Shropshire between he and Ian Wallace.

The two were Wolves colleagues in the mid-1960s, although Wallace had one of the briefest first-team careers in the club’s history when his senior service was limited to four minutes as substitute in a 4-0 home victory over Blackburn in 1966-67.

Hawkins played throughout that early-season game and would include Blackburn among his subsequent clubs while Wallace dropped into non-League.

“I was pulled out of the third team at very short notice to be substitute for the first team after Bobby Thomson went ill,” said Wallace, who has in recent months retired in his mid-60s after a three-year posting in Cyprus brought an end to his loyal service in the MOD fire service.

“Ernie Hunt promised me that if we went four up, he would come off and let me go on. So, when he was fouled for a penalty near the end, he stayed down and asked to be replaced. He had already scored a couple, including one in the first minute.

“I remember handing him my false teeth for safe keeping as we passed each other but I wasn’t allowed to get ahead of myself. I was still ordered to gather the dirty kit at the end and take it to the laundry lady, Mrs Clamp.”

Wallace, a wing-half, was 17 and had signed his first professional contract only that week. He was in the shadows again, though, by the time Ronnie Allen’s side secured promotion in the following spring and he was freed while they were on tour in America in the summer of 1967.

Hawkins flew home early from that trip because his wedding to Wolverhampton girl Jane Turner – the fourth member of our get-together over cappuccino – had been planned for the same time.

Before being trounced at Molineux, Blackburn were flying high in third place in the table, having won five of their opening seven games following relegation. They finished the season in fourth spot behind Carlisle, with Coventry and Wolves going up.

“Graham doesn’t remember but we actually met a few years later when he was playing for Preston,” Wallace added.

“I was up there on business and was walking through the town to the railway station when I bumped into him. It’s hard to accept, though, that was still probably 40 years ago.”

Darlaston-born Hawkins is the only West Midlander to go from being a Wolves fan to a player for them and then, a decade and a half later, to becoming their manager.

He and another ex-Molineux boss Graham Turner will be sharing anecdotes at Shrewsbury Town’s Greenhous Meadow home tomorrow night (Thursday, July 5) at a dinner to raise funds for a new cancer unit at the town’s Royal Hospital. 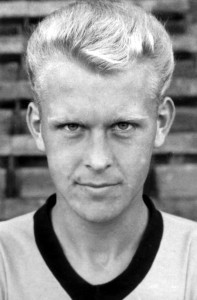 A few places are still available at £35 by emailing graham.hawkins6@btinternet.com or ringing 07760-993866. Cheques and donations should be made payable to the Cancer Patient Care Fund.

Hawkins has undergone chemotherapy and stem cell treatment, having been diagnosed in August, 2009, with low-grade non-Hodgkin lymphoma.