Stars Of The Airwaves 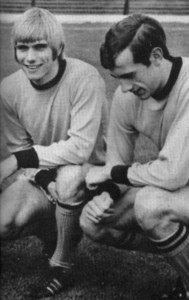 Alun Evans (left) with John Holsgrove in their Wolves days.

Billy Wright and Derek Dougan may have set the standard as former Wolves players who successfully sought pastures new in the broadcasting world but the trail from Molineux to the studio didn’t end there.

Alun Evans and Ken Knighton were Wanderers colleagues in the mid-1960s and went on to appear as regulars on shows in different parts of the world.

Evans’ opportunity at the microphone came on Radio 3UZ in his adopted home city of Melbourne, where his pulling power with former team-mates and even opponents was evident.

“I hosted the show for two or three hours on a Tuesday teatime with Hugh Murney, a Scottish lad who had a boxing background,” he said.

“We were on a racing channel that also covered other sports and football is obviously popular out there, especially with the ex-pat community. I recall Match of the Day used to be shown on a Monday night.

“I used my contacts to find interesting guests. I remember ringing up Kevin Keegan, who I’d played with at Liverpool. He came on. So did Joe Royle and Peter Shilton.

“Kevin was Newcastle manager at the time, Joe would be with Oldham and I think Shilts was still at Plymouth. I rang their clubs to try to get them on the end of the line to record a piece and had a bit of a head start.

“I knew Peter from the England Schoolboys team and had shared a room with Joe Royle when we were both involved with England under-23s. ‘Shuggy’ Merney also got Joe Jordan on from Hearts.

“The radio station probably didn’t realise how big these guys were but the listeners did.”

The only ex-Wolves player to be interviewed by the 3UZ duo in the flesh is a man whose name is well known to followers of this website.

Les Wilson was scouting Canada’s forthcoming opponents Australia when he was tracked down by Evans and invited to the studio.

“That must have been about 15 years ago,” Evans added. “I knew Les well at Wolves and was delighted when I heard he was staying in a city centre hotel. That meant we could get him round to our eighth-floor studio quite easily and he was as good as gold.”

Knighton’s dabble in the radio world was much closer to home – his home, in particular. 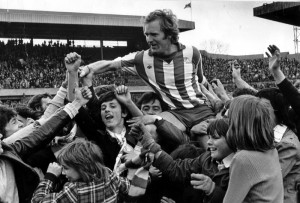 Popular guy....Ken Knighton being chaired off at Hillsborough.

The Yorkshireman had moved on from Wolves and was with Sheffield Wednesday when he made regular appearances at the headquarters of the Steel City’s commercial station, Radio Hallam, in the mid-1970s.

The connection came to our attention via the highly entertaining ‘Confessions of a Footballer Reporter’ book written by Alan Biggs.

“Having someone on who I think was a Wednesday coach at the time was a good audience winner,” the author told us. “He was very relaxed and got on nicely with the staff when he came in on a Friday to preview the weekend matches.”