Farewell To Star Who May Have Achieved Even More 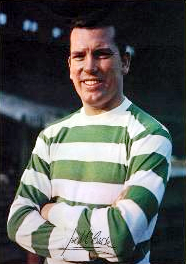 Joe McBride in the famous hoops.

Harsh though it may appear as a means of describing a player who represented his country, was part of a legendary Celtic squad and set major goal-scoring landmarks along the way but Joe McBride’s career was often a case of ‘If only……’

The 74-year-old Glaswegian died last week following a suspected stroke, his career having made waves north and south of the border – alas, not at Wolves.

There were times of unfulfilment and great misfortune as well and his time at Molineux in the middle of 1959-60 fell very much into the former category.

Stan Cullis took the trouble to travel to Scotland a few weeks before Christmas and write Kilmarnock a £12,500 cheque to bring the player home with him at a time when Wolves were chasing hard for a third successive League Championship triumph and aiming to become the first side in the 20th century to win the double.

But McBride never made it into his first team – and chose not to curb his feelings about his stay in these parts when he wrote in a football annual around a decade later.

“It was the worst move I ever made,” he said. “In three months at Molineux, I never once pulled a first-team shirt over my head. Yet I averaged a goal a game in the reserves.

“With Wolves, I seemed to be merely a stand-by, to be used only in emergencies. I often wondered why they had gone to the trouble of signing me.

“I have always reckoned I played well at Molineux but seemed to be battering my head against a brick wall.”

McBride’s CV showed he cut the mustard elsewhere. At Motherwell, he broke Ian St John’s post-war record for goals in a season, at Hibernian he netted 58 times in 91 matches and, most famously, he hit 35 in his first 26 appearances in Celtic’s 1966-67 campaign.

Unfortunately, he then suffered a serious knee injury on Christmas Eve, didn’t play again for the best part of 18 months and so missed what would have been an almost certain place in the Jock Stein side who in 1967 became the first British club to lift the European Cup. Born, like Sir Alex Ferguson, in Govan – in his case, barely 200 yards from Rangers’ ground – he would have fitted snugly into that home-grown team of Lisbon Lions.

McBride played only twice for Scotland but won two league championships and a couple of League Cups with Celtic, totalling 86 goals in 94 games for them. “It was easy to see why the supporters took to him,” said Tommy Gemmell, a scorer for the Hoops in their historic final victory over Inter Milan. “He was one of their own and a real man’s man in the dressing room and out on the pitch.”

The forward himself had once said: “I had been like Pele up until that injury, just scoring goals for fun.” He saw out his career with Dunfermline and Clyde and later took pleasure from watching his son Joe Jr play for Everton, Hibernian and Scotland under-21s.

Surprising though it may seem that he didn’t play a single senior game for Wolves, the record books underline how difficult it would have been for him to nail down a place.

Cullis’s side rattled in a staggering 133 goals in 1959-60 as they finished a point behind champions Burnley, won the FA Cup and reached the semi-final of the European Cup. Six players reached double figures. 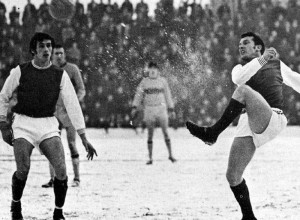 The forward shoots for goal in the snow in Hibs' colours.

From Wolves, McBride joined relegation-bound Luton, where he scored nine times in 25 League matches, and his record for the Scottish League X1 was a stunning one; eight goals in only four outings.

We at Wolves Heroes had been hoping to speak to Joe very soon, having this summer put some feelers out at Cardiff, where his son is now on the coaching staff.

Instead, we express our condolences to the family of a man described as ‘cheerful and modest’ – one who also regularly attended Celtic supporters’ events across the world. His funeral is on Wednesday.