Jack A Giant Among Stars

Farewell To The Man Who Carried The Utmost Authority 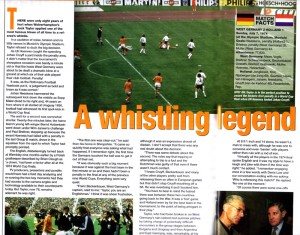 As featured in Backpass. The excellent retro magazine will soon be carrying a full obituary on Jack. Please try clicking on photo to enlarge it.

It’s one of the necessary sadnesses of football’s fair-play stance that we never got to see Jack Taylor at work much in these parts.

The son of Wolverhampton’s best-known butcher was understandably considered too close geographically to be allocated big occasions at Molineux (the field of his boyhood dreams), The Hawthorns and other West Midlands venues.

There would be testimonial matches and charity games, of course, but we mainly had to follow his magnificent, globetrotting career by TV – the 1966 Everton v Sheffield Wednesday FA Cup final and the 1971 European Cup final between Ajax and Panathinaikos were up there behind his momentous day in the global spotlight in Munich in 1974.

It wouldn’t have mattered one jot to Jack, who has passed away at his Shropshire home at the age of 82, that he refereed in an era before the invasive TV eye. He happily left that image-manufacturing and celebrity-status bit to those who craved it in later decades.

He was just a down-to-earth bloke who loved his work and got by with the Bests, Laws and Hudsons because he carried a firm authority they could relate to. He was 6ft 1in and 14st for a start and didn’t stand for much mucking around but his banter with them cut through many a potentially sticky situation.

I interviewed him at length four years ago for the Backpass magazine and he related how Franz Beckenbauer had shouted: “Taylor, you’re an Englishman” when he gave that infamous Dutch penalty with barely a minute on the clock against hosts West Germany.

It was the first penalty ever awarded in a World Cup final and my subsequent research brought up the line from the Rothmans Yearbook: “It was a judgement as bold and brave as it was correct.” Beckenbauer, with the blinkers then off, was in the distinguished gathering in Barcelona in 1999 when Taylor was inducted into FIFA’s Hall of Fame.

Some 20 minutes after that Uli Hoeness challenge on Johan Cruyff in Munich, Wim Jansen went in on Bernd Holzenbein in the opposite area. Another penalty, although less clear-cut.

Jack wasn’t one for extravagant gestures and hogging the limelight. His humour was of the more understated variety but he was tickled by a delay in the kick-off between those two old rivals 38 years ago.

“Time stood still before we kicked off,” he said. “For all their superb efficiency, the Germans had forgotten the corner flags, so there was much embarrassment while we were held up as this guy raced round sticking them in the ground.

“It was another part of an occasion I’ll never forget. There are more men who have walked on the moon than refereed World Cup finals, so it’s something that’s very special to me.”

Jack’s love of the Wolves was obvious. The butcher’s shop in Bushbury Lane was within Molineux’s roar and, on my only visit to his long-time home between Shifnal and Wolverhampton, he lent me several photos of Wolves’ day out at Wembley for the 1949 FA Cup final.

Some three decades ago, he had a short stint as the club’s commercial manager and it was at the decaying ground in the early 1990s that he hosted a sprint challenge to find Britain’s fastest footballer.

Wolves players from the 1960s and 1970s recall him running around Molineux in the afternoons as part of his training – the unseen dedication in a career that was to take him to more than 60 countries and officiate in over 1,000 matches, more than 100 of them internationals.

John Farrington knew him from around town as well as on the field of play, our https://www.wolvesheroes.com/2011/01/13/how-wolves-copped-it-from-old-pal/ story with the winger giving a brief insight into the chat in which he loved to indulge.

We all love to hate a ref. With Jack Taylor OBE, it was impossible to.