Success At Last In Search For Something For The Kids 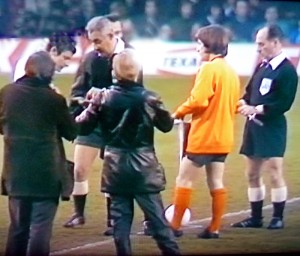 Jim McCalliog, Wolves' acting captain in the absence of the injured Mike Bailey, greets Alan Mullery under the gaze of a famous official.

We at Wolves Heroes have been delighted to help out with a favour for Bernard Shaw’s family by tracing a valuable keepsake from the full-back’s substantial Molineux career.

For several years, his offspring had been asking us to contact them if ever we came by footage of the 1972 UEFA Cup final against Tottenham.

Now, we have finally been able to deliver after a special dvd was compiled at the Spurs end to mark the 40th anniversary of the first all-British major European final.

The production is the work of ILC Media, one of Wolves’ long-time partners, who have secured extensive highlights of the first leg at Molineux, complete with commentary by David Coleman.

“You won’t believe how long we’ve been trying to get hold of something like this,” said one of Bernard’s sons, Matthew, today.

“I’m 38 and arrived just after the family moved back to the Sheffield area when Dad joined Wednesday. But my brother Damian was born at RAF Cosford in 1971 and we’ve always had a certain pull towards Wolves. Damian follows them avidly.

“We’ve never seen more than the odd TV clip of him with Wolves, so we can’t wait to watch what is obviously a very big game in the club’s history. Not everyone’s dad has played in a European final after all!”

We can’t quite claim that the securing of this welcome souvenir has been the biggest news among the Shaw clan this week. Bernard gave his daughter Hannah away when she married on Saturday in Baslow, the North Derbyshire village in which we interviewed him at length in late May. 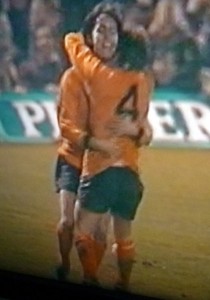 Another 'grab' off the screen...scorer Jimy Mac is congratulated by Danny Hegan.

But, from watching the match highlights, which form part of a 120-minute package, we can confirm that the former full-back had a more than tidy game in Wolves’ 2-1 defeat on a damp early-May night 40 years ago.

That’s although he and Spurs no 2 Joe Kinnear were booked in separate incidents – by every England supporter’s favourite official. The referee was Tofik Bakhramov, the Soviet who had famously hoisted his flag at Wembley six years earlier to show that Geoff Hurst’s shot HAD crossed the line in the World Cup final.

Wolves clearly had Spurs penned in for much of the second half at Molineux and had a corner count into double figures but, following skipper Jim McCalliog’s 71st minute equaliser, were stunned late on when Martin Chivers spectacularly hit his second goal of the night.

Tottenham drew first blood in the return a fortnight later through Alan Mullery’s header and, sadly, Dave Wagstaffe’s brilliant first-half equaliser was not enough to wrestle back control in a meeting of sides who had each scored an astonishing 27 goals on the way to the final.

Chivers and Mullery are interviewed at length on the dvd and the latter admits: “Bill Nicholson always seemed to be more critical of us after a victory than a defeat and went into Wolves’ dressing room after that final and was congratulating them. He told them the better team had lost.”

The Molineux clash, which came five nights before Wolves’ famous League victory there over Leeds, contained an audacious shot by Danny Hegan from a yard inside Spurs’ half. Coleman called it ‘football intelligence’ after Pat Jennings had scurried across his six-yard area to touch it over the bar.

Other observations, apart from once more hearing the crowd chants of the time, include a recognition of the total lack of interest the producers apparently had in anything other than what happened on the pitch.

The dug-outs seem to have been viewed as a no-go area for the cameras and the only glimpses we have of Wolves’ management team are a couple of appearances by Sammy Chung on the field, with his medical bag.

This competition, which Coleman pronounced more than once as the Yoo-fa Cup rather than the Yoo-ee-fa Cup, may have ended in defeat and disappointment for Wolves. 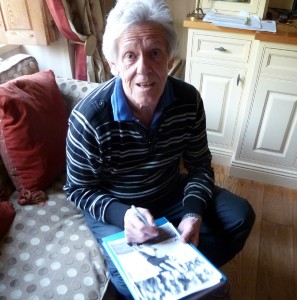 But it nevertheless represents a huge achievement in the McGarry years and we will be delighted to help any readers who wish to obtain discounted copies of the production. Please contact us for further details, by email or through ringing 07734-440095.

* Tofik Bakhramov died in 1993. Remarkably, his passing came barely a month after that of Bobby Moore.