How Knowles Was Almost Talked Back

‘I Begun To Think Of Myself As A Player Again’

The results of an interview conducted in the Knowles household.

Further evidence has come to our attention in the astonishing Peter Knowles story – and it suggests the star forward once went very close to reversing his decision to quit the game.

We at Wolves Heroes have stumbled across a Daily Mirror cutting from the late autumn of 1969 in which the player is quoted at length as saying he was sorely tempted to resume his Molineux career.

The article by the well respected Peter Ingall, says Knowles went back to the ground to collect some belongings two months after his shock retirement and temporarily had his head turned.

And the historic suspension awaiting Derek Dougan, plus a shorter one meted out to Frank Munro around the same time, appears to have been the tipping point.

“Bill McGarry called me into his office and pleaded with me to come back,” he is quoted as saying. “He told me Wolves needed me more after the disciplinary trouble regarding Dougan and Munro.

“He invited me to start training straightaway and said I would be in the team to play Liverpool at Anfield on Saturday. I said I would wait to see the outcome of the Dougan hearing obefore making a decision.

“When I left his office, I had begun to think of myself as a Wolves player again. After being back at Molineux and watching the lads training, it all came back to me.

“My mind was pretty much made up that I would go back and help them for as long as Dougan was suspended.”

The Northern Ireland international subsequently received an astonishing eight-week ban, the suspended two weeks imposed for a dismissal at Sheffield Wednesday in the autumn being increased by six when he was ordered off for bad language in a riot-hit home game against Everton.

Although McGarry’s side had started the campaign with four straight victories, followed by two draws, they had faltered as autumn progressed.

The Doog signed off in a Molineux win over Albion in early November – not to return until FA Cup third-round day in January – but the manager’s plea to a star replacement went unheeded.

Knowles continued in the article: “When I got home and away from the Wolves atmosphere, I began to have second thoughts.

“I realised at once that as soon as I set foot on the pitch in a Wolves shirt, I would never be able to give football up again. 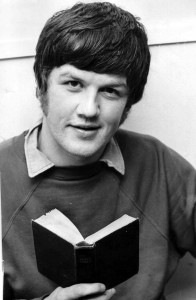 The calling that took him away from Molineux......

“I informed Mr McGarry the next day that I couldn’t go back, even for two months. This was my own decision and not influenced by the Jehovah’s Witnesses.

“I still love soccer – it has been my life. But I must never go back to that ground again.”

Wolves drew 0-0 at Anfield in the absence of Knowles, Dougan and Munro and beat Arsenal in their next game. But their up-and-down form was reflected in a final position of 13th.