Our Tribute To Jim 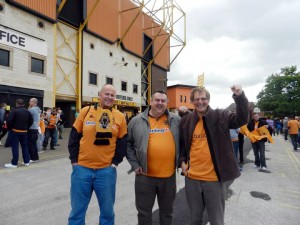 Jim (right) at 'Survival Sunday' 15 months ago; this is obviously not a photo taken at half-time!

We at Wolves Heroes wish to express our deepest condolences to the family of Jim Heath, one of our keenest supporters.

Jim passed away yesterday morning, the first day of a new season as it happens, and leaves a wife Christine and teenage children Nicholl and Jack.

They will know what a brilliant ally he was to this website, not only in supplying occasional articles but also in offering suggestions on content and proving an ever-willing sounding board for our ideas.

The club’s travels in the USA in the late 1960s were a particular curiosity to him and he wrote a long feature in May, 2009, on the victorious 1967 trip undertaken by Ronnie Allen’s squad.

As a globe-trotter himself, he was fascinated, too, by the Texaco Cup triumph in 1970-71 and has reminisced on these pages about both that and the club’s pre-season preparations in the Home Counties under Graham Taylor in 1995.

As for the more recent past, he was a natural as a member of the inaugural Wolves Fans Parliament.

How glad we now are that our sister company Thomas Publications were able to help put Jim’s name on the book shelves last year. He compiled the excellent Wolves In 20/20 Vision paperback and loved every minute of it.

Having already appeared on the club’s official history dvd, he was flattered to find himself being interviewed by BBC Midlands Today in the Molineux club shop last December after he went into print. 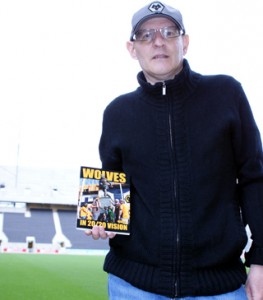 In the same outlet, he was also honoured by the presence of Matt Murray, John McAlle, Phil Parkes and his good friend Derek Parkin for a signing session and was interviewed on local radio as well as at length in the club programme.

A revelation in the book confirms Jim’s wanderlust and devotion. In 1972, he told his dad, who was a little less besotted than he was with Molineux matters, that he was off to watch Wolves play Juventus in the UEFA Cup. What he omitted to tell him was that it was the away leg. Cue an anxious mum waiting in her car outside Molineux almost until breakfast time the following day to pick up their 13-year-old.

Jim lived in Telford but following his beloved club didn’t always come easy. He worked in the capital for more than a decade and became a good friend to London Wolves, not least when he stood on street corners, especially at games in the south east, to sell copies of ALOB.

He always refused his due commission and was a keen, entertaining contributor to the fanzine; in fact he seemed to be keen about so much, which is why he crammed so much into his 53 years.

His friends from another of his passions, music, will have separate fond memories and hopefully one of them will tell the tale of how he briefly came to share an office with Paul McCartney.

He certainly lived his life to the full. More than once, he went to support England’s football team when they were competing in overseas tournaments, notably in America under Graham Taylor in the summer of 1993. He also watched Ashes cricket on one of the family’s two visits to Australia and at other times chalked off the Caribbean and many other points on the globe.

Typical of him, despite his problems, he was planning to support Graham Hawkins’ charity dinner last month, only for his condition to worsen and make a night out impossible.

Illness has taken him long, long before his time and he now leaves a huge hole in the lives of those of us lucky enough to have known him. 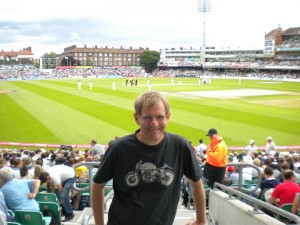 Jim at The Oval two summers ago.

But he was thrilled to have seen through Wolves’ three-year stay in the Premier League. England’s status as no 1 Test team sat nicely with him to the end as well, as did AFC Telford’s rise up the non-League ladder, and it goes without saying that he’d have been proud of Team GB’s Olympic heroics. It was somehow appropriate as well that Wolves yesterday made progress, however scratchily, in the competition he saw them win twice.

The family have requested that donations be split equally between Severn Hospice and Telford-based St George’s Cricket Club, where Jack is a promising all-rounder. Please contact us at info@wolvesheroes.com if you need details for these organisations.

The funeral is at 2pm at Telford Crematorium on Wednesday, August 22.

* Thomas Publications have decided that ALL of the proceeds of any future on-line sales of Jim’s book, Wolves In 20/20 Vision, will go to the above causes, with purchasers encouraged to make their cheques payable to one or the other, or both. Please email info@thomaspublications.co.uk or ring 07734-440095 for further details.