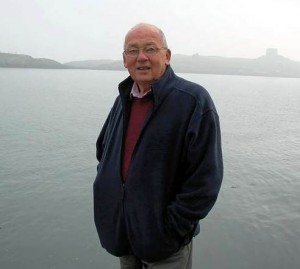 The five-times-capped Republic of Ireland international is reported to have started his career as an amateur with Birmingham, also playing in the area for Sheldon Town and Brockhill after moving to the West Midlands with his parents when he was eight.

He moved to Molineux as a professional in September, 1957, and was given his senior debut by Stan Cullis at right-back against Bolton near the end of Wolves’ successful League title defence in 1958-59.

The race to replace eye injury victim Eddie Stuart at Burnden Park was between the 19-year-old and Gwyn Jones, the two having played 20 Central League games together that season. Kelly received the nod and frequently recalled over the years how he pulled down the legendary Nat Lofthouse to concede a penalty as Bolton hit back from two down with 18 minutes to go to draw 2-2!

The game was played on the same day that Billy Wright was facing Scotland at Wembley and winning his 100th England cap. Bolton’s left-winger Doug Holden was also on international duty.

Kelly, who had been a member of the Wolves side who famously beat Chelsea in the final of the FA Youth Cup final, was given four more senior appearances in the same role in 1959-60. 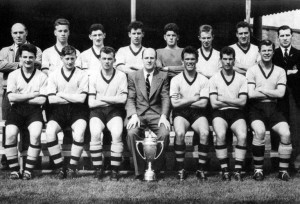 After impressing in a midweek friendly win at Celtic, he kept his place in a young side who beat Manchester United 3-2 at Molineux to move level on points at the top.

In that spell, in which he was covering for the injured George Showell, he also played in a home win over Newcastle and defeats at Preston and Burnley.

Another quartet of League outings came his way in 1960-61, the highlight being a 5-1 victory at Arsenal in the club’s final away match. He appeared that season as well in the European Cup Winners Cup away leg against FK Austria.

The Dubliner had his most fruitful Molineux season in 1961-62, playing seven times in the First Division and in the FA Cup third-round win at home to Carlisle.

All but one of these games were in the no 3 shirt and there was a sorry end to his 18-game first-team career at the club with the 7-2 League defeat at Blackpool in January, 1962. Bobby Thomson was introduced the following weekend.

“Phil had some terrific players as competition, like George Showell, Gerry Harris and Eddie Stuart, and would have played a lot more games for Wolves had it not been for them,” said his former team-mate Malcolm Finlayson today.

“But he was a very good player in his own right and a super guy. He was one of those I knew I could rely on if I needed to send messages out to my defenders.”

With his chances limited, James Philip Vincent Kelly, as he was Christened, was transfer-listed by Cullis in the summer of 1962 along with Jones, Stuart and Vic Cockcroft. He was the last of the quartet to depart, moving east to Norwich in the August and making 134 senior appearances for them, including 114 in the League.

He once deputised between the posts for the sent-off Kevin Keelan against Northampton and kept his goal intact.

Injuries dogged him as his Carrow Road career went on and he was only 27 when, on December 10, 1966, he played for the last time. By coincidence, the game was a 2-1 Second Division defeat at home to a promotion-bound Wolves.

Kelly’s five Republic of Ireland caps, including two against Czechoslovakia in 1961-62 and outings against Wales, Scotland and Norway the previous season, all came while he was at Molineux.

Much later, opportunities came for Kelly in non-League football. He became a successful player-manager at Lowestoft, Newmarket, Thetford (twice) and Reepham. 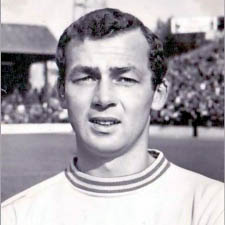 He also played rugby and golf and was a founder member and wicketkeeper of Norfolk’s Black Sheep Cricket Charity, which has raised more than £50,000 for local children’s charities.

The Evening News in Norfolk reports that he leaves a partner, Sally, and daughters Nicola, Tara and Sara, plus seven grandchildren.

A funeral mass will be held at the Cathedral of St John the Baptist in Norwich a week on Thursday at 10am.