A star at the wheel.

Monday, July 23: Bumped into Peter Knowles in Marks & Spencer and found him full of enthusiasm for discussing the sports news, as usual. Only this time it was cycling that was uppermost in his thoughts. He said he’d just seen Hugh Porter in the store’s cafe and been told Mark Cavendish and Bradley Wiggins would win Olympic golds.

Wednesday, July 25: Caught up on Steve Bull’s prowess behind the wheel. He apparently finished fifth in a celebrity race at Silverstone, where he was beaten only by guys who compete on a regular basis.

Monday, July 30: Learned more about Wolves’ unsuccessful attempts to sign a star of the 1960s.  I was in Swindon today to interview Don Rogers for Backpass and discovered Stan Cullis had gone there to watch him in a cup-tie against Chelsea in 1963. Don reckons Wolves bid for him in about 1966 but were rebuffed because Wiltshire had already been plundered for Ernie Hunt and Bobby Woodruff. “There was a scout round here who I played table tennis with and who became a partner in my sports shop,” he told me. “He got on well with the people at Wolves and I believe the matter went a long way before being called off.”

Tuesday, August 7: I had hoped to meet Neil Emblen while he was over in charge of the New Zealand team for the Olympics. The best we managed was a phone call and my only live Games experience was while arriving at our favourite Midlands hotel this afternoon, the Chesford Grange in Warwickshire, just as the Canadian women’s football team were checking in. Neil and his squad had been using the same base a week or so ago. We also once encountered Sammy Clingan here in 2009 during the weekend he made his Coventry debut.

Wednesday, August 8: Received a text from Bobby Gould showing the front page of the Daily Express. ’22 Carat Gould’ read the main headline the morning after Sir Chris Hoy had been among four more big GB winners. Two more and we could have had a free advert for Bobby’s autobiography!

Saturday, August 11: Awoke to a call from Charles Ross and the dreadfully sad news that our close mutual friend Jim Heath had died. On the first day of the new season as well. (Please also see August 22).

Thursday, August 16: Interviewed Steve Daley for an entertaining feature in the Wolves v Barnsley programme and signed off by saying we’d meet in a few days at Molineux at the meeting of his two favourite clubs. 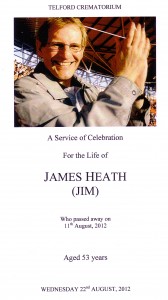 Wednesday, August 22:What a turn-out for Jim Heath’s funeral! There must have been 250 there – many of them friends from Wolves (including Derek Parkin), the music world and his local cricket club, where we reconvened after descending on Telford Crematorium. Charles Ross brilliantly kicked off the tributes and re-introduced me to Dave Worton (his predecessor as editor of A Load Of Bull) and the likes of Bobby Smith and ‘John Ireland Whinge A Lot.’ The service ended with an incredibly moving playing of The Liquidator. Donations are still being welcomed for Jim’s chosen causes, Severn Hospice and St George’s Cricket Club, and Charles has manfully gone the extra mile by producing a four-page leaflet tribute to Jim, A Load Of Heath, which he’s selling for a pound a time to further boost the kitty. Please contact us here or log on to www.stgeorgescc.org.uk to discover how to donate. May our wonderful friend, an absolutely top bloke, rest in peace.

Sunday, August 26: Had a chat at pitch-side with Michael Kightly after he had made his home debut for Stoke in the draw with Arsenal. Had already seen Stephen Ward in the stand – he had been left tickets by the man who referred to him in an article in the programme as his best friend in football. Got home to see Mick McCarthy make his debut on Match of the Day 2, so a bit of a Wolves old boys day!

* Please also see http://www.londonwolves.com/html/2020_jim_heath.html for London Wolves’ special tribute to their former member, Jim Heath, including the laying of a wreath at Molineux on Saturday.