How To Keep Plenty In Reserve

American Idea Could Stiffen The ‘Stiffs’

Charlie Bamforth laments that what passes for Central League football these days isn’t what it used to be – even if his culinary tastes have improved. And he argues a case for the implementation of a system successfully used in sport in his adopted country.

I used to stand on the Waterloo Road paddock at Molineux. I was always in fear and trepidation of some giant arriving at the last minute to obscure my view but, thankfully, it seldom happened.

I’d be there as soon as the gates opened. I would soak it all in, to the flavour of a Wagon Wheel and Bovril (an unlikely food-drink pairing, I know, but I have strange tastes). 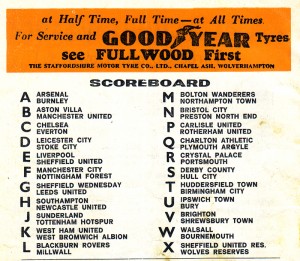 One of the indelible images I still have of match days is the half-time scoreboard away to my left, where the North Bank met that delectable old zig-zag Molineux Street Stand. The only score that really concerned me was the one marked X (for some reason, that was the last letter on the board) because that referred to the Wolves Reserves’ match.

It was the norm for the second XI to play the reverse fixture to the one we were witnessing at Molineux. So for instance, if Bolton Wanderers were at our place, the ‘stiffs’ would be up at Burnden Park.

It was the days of the Central League: a REAL competition, one that seemed to matter. The teams were invariably a composite of very senior professionals and upcoming hopefuls, usually with the balance tilted in favour of the former, for the simple reason that clubs had other sides playing on the day in competitions that weren’t to be sniffed at.

Every true Wolves supporter of more advanced years is well aware of the 1957-1958 season, when the first, second, third (“A”) and fourth (“B”) teams won their respective leagues (the old First Division, Central League, Birmingham League and Worcestershire Combination).

The club had a huge staff and even the third team included men with quite an accumulation of years as full-time professionals. Stanley Cullis thought nothing of using all three of his higher-level sides in a hierarchy through which players could rise and fall. 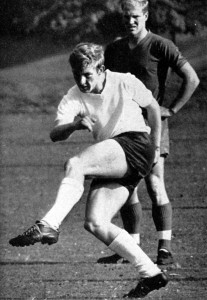 It was not unknown for a player to find himself in the first team one week and the A team the next – it happened to Nigel Sims and England international Alan ‘Noddy’ Hinton, for example.

And bear in mind that Wolves had teams in the Wolverhampton Amateur League as well, not to mention a nursery club at Wath in Yorkshire that had two teams, one of which competed against the third teams of clubs in the North and North East in the Northern Intermediate League. Right the way through into the 1970s, Wolves competed in the West Midlands League (a name change from the Birmingham League) and the Worcestershire Combination (later known as the Midland Combination).

And so another essential part of my afternoon at Molineux, having basked for a while in the post-victory afterglow of the Sousa march played over the loudspeakers, was to buy the Sporting Star just before I boarded my train back to Wigan, via Crewe.

In the much-missed ‘Pink,’ my first search was for the Central League team report, then the West Midlands League side update and finally the B team notes. They would all be there and I would pore over the teams – all listed but for the Worcestershire Combination.

Where am I going with all this? The answer is my irritation at the sheer imbalance between the size of the professional squads that most clubs in the top two divisions have and the opportunities both for these players to face worthwhile competition and for football supporters to witness their efforts. In short, I bemoan the dearth of a worthwhile hierarchy of leagues in which players can occupy themselves.

I think I know the arguments; that it’s very costly with all the kit, transport, floodlighting etc etc Heck, most reserve games aren’t even played on the main ground these days and are farmed out instead to satellite clubs. And perhaps that is the opportunity: a system analogous to what we have over here in the United States in baseball.

Let me illustrate by describing how it works for my favourite ball-club, Oakland Athletics, although it is exactly so for all the others.

A club will have a huge number of players who are distributed between the ‘mother’ Major League club and a series of clubs across the country that perform at levels of decreasing skill level. Each of those are managed by a separate franchise who own and run the ground, take the revenue etc but simply use the players made available to them by Oakland in accordance with performance and level of development.

So there are 40 players on a club’s Major League roster, although, for most of the season, only 25 of those can actually be active. The rest are at the next level down (AAA) – in this instance, the Sacramento River Cats just ten miles from my home – or on the disabled list. So, if an Oakland player is hurt, he goes on the injured list and a player is called up from Sacramento. Equally, if a player is not performing, he can be shifted to the River Cats and replaced by someone who is promoted in his place.

The River Cats have their own roster, including those on the 40-man Oakland list who are not presently at The Coliseum and others who are at AAA level but not yet (if ever they will be) honoured by promotion to the big club (which is called going to The Show).

In this same way, there is player exchange between Sacramento and the AA club, who happen to be in Midland Texas, and the A level side, who are in Stockton, California. Below that are various levels of rookie ball. Very occasionally, a player may leapfrog a level, or even two.

Consider the Sacramento River Cats…..they have a 14,000-capacity stadium and it is not uncommon to see it filled to capacity. There is all the razzmatazz of the big leagues and the fans are thrilled to see familiar names from the “bigs” who may be out of form or rehabilitating alongside the stars of tomorrow. It works because it is not delivered as a second-rate entity, as reserve football is in England. Rather, it is a quality product in its own right.

Now you might be saying that we have something akin to this with the loan system. Heaven knows, the likes of Carl Ikeme and others have certainly benefitted from that concept.

But how much more engaging it would be if something of the MLB model might exist in English football. Maybe it could be founded on the basis of existing clubs, so (purely hypothetically and by way of illustration) a hierarchy might be Wolves, Telford (AAA), Truro (AA) and Redhill (A). And the same for other clubs.

Perhaps it would be better, so as not to interfere with an already worthy pyramid of long-standing and very proud clubs, if an entirely new series of clubs were created, each constituting franchises who populate new grounds with the player portfolios of the superstar clubs.

Maybe it would only go down a level of two (the equivalent of AAA and AA). But it surely would be preferable to what we have now: so many decent footballers up and down the land getting splinters in their rear ends through an inability to get a decent competitive game each week or being farmed out almost at random to ‘get their kicks’ alongside players who do not belong to the same club ethos and culture.

* Wolves first competed in the Birmingham League in the guise of their reserve team in 1892-1893. They finished as champions. The second team remained in the competition until 1920-1921, the club returning with the third team in 1947-1948. 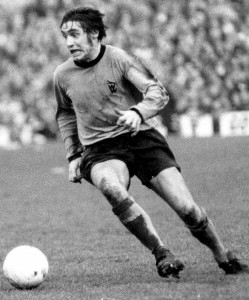 ** Wolves’ fourth team first appeared in the Worcestershire Combination in 1950-1951. It was that 1957-1958 campaign that saw them top dogs for the only time, although they were runners-up twice.

They contrived to finish bottom for three seasons on the trot (from 1965-1966 to 1967-68 inclusive, despite having some pretty useful youngsters on call in some of those years, such as John McAlle, Bertie Lutton and Paul Walker. This is perhaps testimony to the challenges of having youngsters (no matter how skilled) up against bruising campaigners.