Here, at the tail-end of this fantastic Olympics summer, we have pleasure in reproducing the Games-related article we penned six months ago on Bill Slater and his family – with apologies to those who read it at the time in Wolves’ match-day magazine. 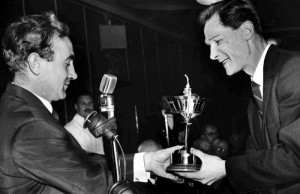 Where do you best start a feature about Bill Slater OBE, CBE? With his leadership of the Wolves side who defeated Blackburn to win the 1960 FA Cup final? With his pivotal role in helping bring three League Championship titles here in the 1950s or with all those England honours, as an amateur and a professional?

Then again, of course, he was also a Footballer of the Year and has those letters after his name.

This being Olympics year, though, we will kick off on this occasion with his participation in a Great Britain side who had long been forgotten until Stuart Pearce was asked to bring together a 2012 version for this summer’s extravaganza.

Not only does Slater have a place in history as the last amateur to have played in an FA Cup final (for Blackpool against Newcastle in 1951), he was also part of the team who travelled from these shores to play in the Helsinki Olympics the following year.

It was the Games which marked the emergence of the Hungarian line-up who would so mesmerise England at home and away as well as providing more than half of the Honved team on show here in 1954 in arguably Molineux’s most famous ever fixture. Alas, the venture was not a success on the field for the GB footballers.

“It’s a long while ago but, if I remember right, we were knocked out even before the opening ceremony,” Bill told us. “We had a qualifying game which I believe went to extra-time before we lost.

“One or two of us stayed on to see the ceremony, then we played another couple of games in Scandinavia before heading home.”

Surprising as it appears, the British team were defeated 5-3 by Luxemburg – a result that can be partly explained by the fact our team comprised only amateurs. On the other hand, though, it did include George Robb and Jim Lewis (later to develop excellent careers with Tottenham and Chelsea respectively) as well as the young Slater, who was then a Brentford player.

But Bill’s Olympic experience was much longer-lasting than that of his team; in fact it has proved to be almost a lifelong passion. 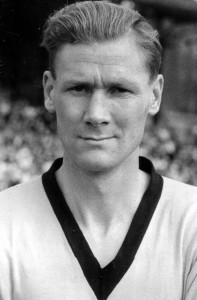 Long after Hungary had stormed to the gold medal in the Finnish capital by thrashing the 1948 winners Sweden 6-0 in the semi-final and then condemning Yugolslavia to the silver, he stayed in close contact with the once-every-four-years spectacular.

Daughter Barbara, who was born a couple of weeks after Wolves had retained their League Championship crown in 1959, competed in the gymnastics at the 1976 Games.

“My mother and father went out to Montreal to watch me,” she said. “I think it was the first time Mum had been on a plane. My elder brother was probably 18 at the time and went off to have a great holiday with our two siblings at Butlins, Minehead.

“Dad actually coached me. He couldn’t go on the floor because he wasn’t our official coach but he was a lecturer in PE at the time and his area of expertise was sports movement. I had been involved in schools and club gymnastics but was striving to get to the next level, so I used to go the university late at night, about 10pm, and use their facilities under his guidance after the students had finished for the day.”

All of which explains why Bill’s anticipation of this summer’s events extends far beyond just the sport in which he is best known.

Having worked as deputy director of the then new Crystal Palace Sports Centre in the 1960s, subsequently held a position with the Sports Council and been a member of the National Olympic Committee, his interest is a wide one.

He also held posts at Liverpool and Birmingham Universities – further reason why he was awarded the OBE in 1982 and the CBE in 1998, both for his services to sport.

Despite turning 85 before the Games begin, he already has a ticket for the men’s football final at Wembley on August 11 but added: “I’d love to go to some of the athletics as well and I’ll be watching a lot of the other events closely on TV.

“Although we didn’t have any success when I appeared in the Olympics, I’m very proud to have played in one and still have the trophy we all received for taking part.

“We selected amateur players from all the home nations and I just hope things can be satisfactorily sorted out now and the different countries are happy to have their players involved this time.

“I think I had just joined Brentford from Blackpool in the summer of 1952 and that was a happy arrangement for me because my wife-to-be was living just down the road, near where we now live in Ealing. I was thrilled to play, as I was for the England amateur team and, of course, the full team a few years later.”

Slater revealed his studious side following the Helsinki Games by writing a report about the Hungarian side and sending it to the FA.

Given how an England side led by Billy Wright were subsequently dismantled by the Magyars both at Wembley and in Budapest, he remains unsure how much notice was taken of it! By the time the Hungarians, Puskas and all, reached the final of the 1954 World Cup and surprisingly lost to West Germany in Berne, they were becoming much better known.

The Wolves wing-half, who later became a powerful centre-half and eventually the successor to Wright and Eddie Stuart as Molineux captain, won 12 senior England caps, including four at the 1958 World Cup finals in the wake of the League Championship trophy coming to rest here for the second time. 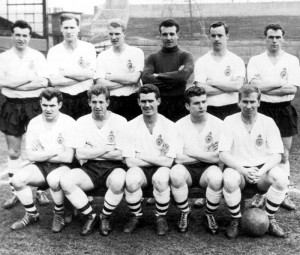 Slater, one in from the left on the back row, is joined by Ron Flowers and Peter Broadbent in this England line-up from April, 1960 - the spring in which he was named Footballer of the Year.

It was there, in Sweden, that he was part of an all-Wanderers half-back line of Slater, Wright, Clamp, with Ron Flowers (himself to finish with 49 senior international) left at home in reserve.

“It actually cost me money to go to the World Cup finals,” Slater added. “I was working for Birmingham University then and had my wages docked while I travelled with England. Although I wasn’t particularly well paid, the expenses I received from the FA certainly didn’t cover what I gave up. But I have no regrets. Who wouldn’t want to play in the World Cup if they had the chance?”

* Barbara Slater was born in Birmingham and was named in 2009 as the new director of BBC Sport. In keeping with family standards, she gained degrees from Birmingham and Oxford Unversities and qualified at Loughborough as a PE teacher. Her uncle, John Warr, a brother of her mother’s, was a bowler who played two Test matches for England.