Surprise Addition On The Book Shelves 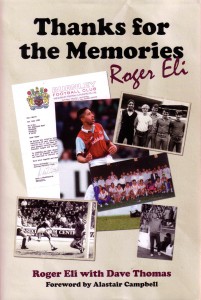 The co-writer should not be confused with the former Wolves and Burnley winger of the same name!

Billy Wright and Derek Dougan wrote several books, Stan Cullis and Ron Flowers each compiled autobiographies, Bert Williams has come up in recent years with a delightful ‘my life in pictures’ publication and Steve Bull has his name on several hardbacks or paperbacks.

To the list of former Wolves men who have entered the literary world, though, we can now add one Roger Eli.

The midfielder played only 21 games for the club, all of them in the bottom two divisions in the harrowing mid-1980s days, before retreating again as a member of that large gathering – the band of men who tried and failed to halt the Molineux slide.

Eli, who was a team-mate of Dennis Irwin, Terry Phelan and Scott Sellars in a Leeds team who won a youth tournament in Switzerland, went on to become a popular figure at Burnley. He won the Player of the Year and Goal of the Year awards and emerged as something of a cult hero.

But his playing career was very much of the journeyman variety. There was plenty of club-hopping, including spells in Scotland and China.

“For every Terry, Tevez or Torres, there are scores of footballers that make a living from the game who could write a manual on the pitfalls and obstacles,” reads the front inside flap of ‘Thanks For The Memories: The Roger Eli Story.’

“This isn’t a book about money and playing in European leagues and World Cups. Nor is it a sensationalist, tabloid-style, expletive-filled story of recovery from debt, gambling and alcoholism. It’s about life.

“This is a story about what lies at the heart of football, about how cruel it can be and how success is so fleeting.”

Eli writes about the influences on him from the likes of Brian Clough, Billy Bremner and Eddie Gray and dedicates a chapter, entitled ‘The Wanderer,’  to his Molineux stay.

It contains one glaring inaccuracy. He says he was signed on a free transfer by Sammy Chapman in January, 1987. His arrival was actually 12 months earlier.

The anecdotes are entertaining. He describes Wolves as ‘a shambles’ and ‘hanging by a thread’ and says life at the club contrasted sharply with the ‘five-star luxury of Leeds.’

He also has an interesting take on whose goals provided the momentum for the club to accelerate away from the abyss.

“It was Mickey Holmes who might well have saved Graham Turner’s job in his early days when Mick went on to have a magnificent scoring sequence,” he writes. “Had that not happened and Turner been sacked, you wonder if, in time-honoured tradition, a new manager would have shifted Steve Bull out and Bully would never have become the legend he did.” 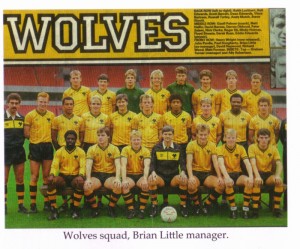 A nod in the picture pages to difficult times at Molineux.

Chapman was clearly a fan of the Bradford-born youngster and informed him at one point that David Pleat was watching him. Eli also loved working with Brian Little.

Even Turner, the man who moved him on sharpish, admired him. “There was a practice game at Wolves and Turner came up to me and said a strange thing,” he continues. “He said: ‘I don’t know why I’m letting you go. You’re actually my best midfield player.'”

‘Thanks For The Memories: The Roger Eli Story’ (£14.99) is published by Vertical Editions. The foreword is by Burnley fan Alastair Campbell.