A Sort Of Goodbye To Graham 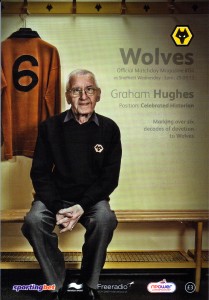 Bowing out in style from full-time employment.

A host of Wolves favourites were at Molineux last night for a party to mark Graham Hughes’s official retirement.

The club’s former chairman Jonathan Hayward, who was also at the home victory against Leicester two weekends ago, put in an appearance, as did the club’s long-time secretary Keith Pearson – a man rightly lauded as having done much to stave off the threat of extinction in the mid-1980s.

And such is the popularity of the 78-year-old who has worked at Molineux in a variety of roles for three decades that the recently sacked Terry Connor also insisted on being present to say farewell.

John Ward, who this week lost his job as Colchester manager, Graham Turner, Chris Evans, Keith Downing, Barry Holmes and Tony Lacey were other past members of the Molineux backroom in a gathering of more than 200 while a representation from the present staff was headed by Tony Daley.

Peter Broadbent’s wife Shirley was also there to enjoy a ‘This Is Your Life’ themed tribute hosted by Baroness Heyhoe Flint, who interviewed Turner, Bull and Murray on stage and read out a personal thank-you from Sir Jack Hayward.

Jez Moxey kicked proceedings off by paying respect to Graham, who has included looking after the home dressing room, stocking and maintaining Molineux’s fabulous trophy cabinets and showing visitors around among his many duties over the years.

And the chief executive underlined how Wolves have far from seen the last of the lifelong fan by telling him: “I expect to see you here tomorrow and Monday – and again later next week.”

Wolves Heroes were flattered to be asked to join in with the memorable send-off by providing a four-page tribute to Graham, who is to remain active at Molineux in a less formal capacity, in today’s match programme. 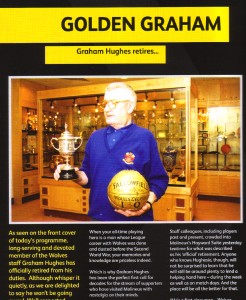 Graham Taylor and Mike Stowell were among those we spoke to at length by way of research and anecdote-gathering.

And the publication for the visit of Sheffield Wednesday honours Molineux’s man of the moment in style by including his picture on the front page as well as a host of others on the inside pages.

Former manager’s secretary Dot Wooldridge and ex-ticket office manager Mel Bird were others who made visits back to the stadium for yesterday’s get-together.

Graham earned a special round of applause when it was announced that he had donated his massive collection of memorabilia to the club. Some of it will be on display in the fabulous new Stan Cullis Stand museum that opens this autumn.

* Wolves All Stars are in action at Aldersley Stadium, Wolverhampton, tomorrow (Sunday, kick-off 12 noon) against a team representing ‘Balls to Cancer.’ Jody Craddock is to play half a game for each side.