A Hole Lot Of Fun For Richie 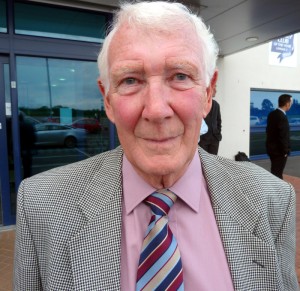 Golf plays a big part in Richie Barker’s life these days. Around a decade on from the last of his many jobs in football, the former Wolves assistant manager was absolutely bewitched by Europe’s stunning weekend victory in the Ryder Cup. And he himself has just been overseas playing, timing his return from a few days in northern Spain for last Thursday night, so he wouldn’t miss any of the drama from Medinah.

“I live close to Market Drayton Golf Club and play there around four times a week,” he says. “Often these days, I only manage nine holes at a time but I still love the game. My handicap is 12 but I have been down as low as six.

“Even by the standards of this sporting summer, with the Olympics and everything else, I thought the Ryder Cup was just remarkable. I didn’t want to miss any of it.”

Cup success, of course, is nothing new to him. He was a surprise Wembley winner with Wolves in the final of the 1980 League Cup, helped pilot the club to the semi-finals of the FA Cup in 1979 and 1981 and worked at Ron Atkinson’s side when Sheffield Wednesday, then of the old Second Division, beat Manchester United to win the League Cup in 1991.

Less well known is the fact that he steered Egyptian club Al-Zamalek to glory in what was then known as the African Champions Cup, the continent’s equivalent of the European Cup.

“I had some of the highlights of my coaching and management career in the cups,” he added. “Helping Wolves beat Forest was memorable because we were such underdogs.

“I remember John Barnwell and myself worrying before the game about Emlyn Hughes and George Berry trying to cope with the pace of Trevor Francis. Trevor was very sharp and Emlyn, for all that he gave you on the pitch, wasn’t the quickest then.

“But some of our anxiety was eased when Cloughie decided to push Trevor wider on the right. We had already made special plans to use Kenny Hibbitt in a more central position and play Peter Daniel deeper on the right, so he could help Geoff Palmer keep an eye on John Robertson, who we saw as a danger man.

“It all worked like a charm. Peter had great energy and loved a tackle but wasn’t the best passer. He stopped Robertson getting many crosses into our box. Kenny and Willie Carr, who were the sort of good footballers Barney liked, were important when we had the ball because Wembley is a big pitch and you need people who can pass well.

“We were thrilled when the planning came off. I loved my time at Wolves, a real club as I call them, and was so grateful to have the chance to work there.

“I was managing Shrewsbury in succession to Alan Durban when Harry Marshall rang and asked for permission to speak to me. To be honest, I always preferred coaching to managing and thought I was better at it. I had no interest in doing deals and wanted to be on the training ground with the players.

“I had known Barney when I was a player at Notts County in the late 1960s and he was at Forest. We didn’t know each other well but our paths crossed again at Peterborough at the end of my playing career when he was assistant to Noel Cantwell.

“I’d had a broken leg and Noel fixed me up to do some scouting while I recovered. I obviously got on well enough with John to be offered the job after he was appointed at Wolves late in 1978, although I never asked him what made him come for me. When we went out to Florida with Wolves at the end of one season, we went to Noel’s house over there for a party. 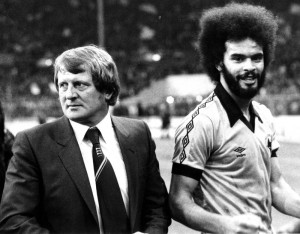 John Barnwell and George Berry amid the full-time euphoria at Wembley in 1980.

“Barney and I got on well and I liked his company. He was always upbeat, knew plenty of people in the game, was a very good communicator and gave me carte blanche on the training ground.”

With Barker’s switch to Molineux, the job as Shrewsbury manager passed to Graham Turner, who, in a player-boss capacity, brought his team a few miles east for an FA Cup quarter-final in 1979. The teams drew on a mudbath of a pitch in front of 41,000 but Wolves ran out comfortable winners in the replay at Gay Meadow, only for a virtual ‘no-show’ to cost them any chance of downing Arsenal at Villa Park in the next round.

There was further semi-final disappointment in 1981, when Barker shared in the dismay of Wolves being asked to play Tottenham in a replay at the supposedly neutral venue of Highbury.

But, with the signings of Hughes and Andy Gray, a brief taste of European football and a sixth-place top-flight finish along the way, the Loughborough-born former centre-forward has good reason to remember his time here with affection; even if he admits to going ‘ballistic’ when Dave Thomas insisted on wearing rubber studs and slipped over when through on goal in a game at QPR!

“I was actually offered the Wolves manager’s job once,” the 72-year-old revealed. “I’m guessing it was about 1984. Derek Dougan called me but I wasn’t sure which direction the club were going in then. Tommy Docherty went in instead. As we know, they virtually disintegrated after Barney left.”

Barker found himself succeeding Durban again, this time at Stoke, where Derek Parkin was among his captures. Three satisfactory years there from 1981 were followed by an ill-fated spell at Notts County, where he had spent four good years as a player. There was also some globetrotting……

He had a year in Greece with Ethnikos, the highlight of which was beating Olympiakos 2-0 in the national stadium and ending his club’s wait of over ten years for a victory over them.

Then a call from Cairo summoned him for talks in London and led to his appointment in Egypt.

“I always say that managers should have at least one job abroad,” Barker said. “It certainly broadens your horizons. I didn’t have the chance to take my own coaches to Greece or Egypt but was happy with the ones I had and we had success at Zamalek.

“The club were league champions when I arrived, so we went into the All African Cup and won it. We went to countries like Cameroon, Zambia and Zimbabwe and made it to the final before winning in a shoot-out in the Ivory Coast.

“It was obviously a big thing because the fans are absolutely fanatical in some of these countries and the atmosphere could be quite frightening at times. But I had good technical players and loved my 18 months there.

“I think we made it to the second round the following year and lost in Accra, Ghana, so that was the end of me! I came back to England then.”

Ray Harford, who he knew well from coaching courses, invited him to join him at Luton and the two clicked. Cue another League Cup run and, for Barker, a strange end.

“I was quite happy working there without being too fond of the area as a whole but it was the time Luton had their plastic pitch and I was never sure how long Ray intended to be there.

“We reached Wembley and I was due to come up against Forest there again. Then Big Ron rang and asked: ‘Would you rather go to Wembley with Luton or come and join me at Sheffield Wednesday?’ By ringing a couple of weeks before the final, I think he was trying to find out how keen I was to go and work with him.

“I said yes to him because I considered them a better bet long term and we had a relegation and an instant promotion before winning the League Cup thanks to John Sheridan’s goal in 1991. Then, with Trevor Francis as my boss, we lost to Arsenal in the final of both the FA Cup and League Cup in 1993.

“Ron had gone to Villa in the meantime without asking me to go with him but I was happy at Wednesday. My daughter became a fan of theirs and we went together to watch them at Derby on the first day of this season.

“At Hillsborough, I saw the best young player I ever worked with, Chris Bart-Williams. Strangely, he was the player who missed the late penalty at home to Wolves in the FA Cup tie in 1994-95. Then we lost the shoot-out down there after leading 3-0. 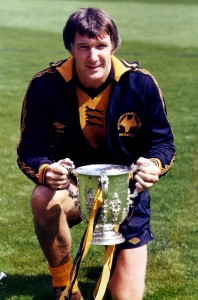 “You know, I don’t think we ever got over that. It took something from us which we never got back. I stayed until soon after David Pleat was appointed as Trevor’s replacement and was then asked by Ray Harford to go to West Brom, where I was chief scout and had a decent year or so.”

Barker, who had kicked off his playing career with an extraordinary scoring record of well over a goal every other game in some 300 matches and seven years with a non-League Burton Albion, had his final posting a decade or so ago when Shropshire-based Paul Bracewell, one of the driving forces of his Stoke side in the early 1980s, asked him to join him in the dug-out at Halifax.