Another Quality Offering From Backpass

Much For Wolves Fans To Go Misty-Eyed Over…. 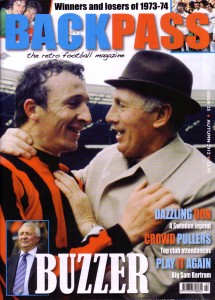 Wolves stories and references are again well to the fore in issue 25 of the growing nostalgia football magazine Backpass.

A double-page spread on mid-1980s Molineux forward and Wanderers fanatic Dean Edwards takes top billing for those of a gold and black persuasion.

He reveals who his boyhood idols were at the club – strikers, of course! – and talks of the major impact he witnessed from the likes of Tim Flowers and Andy King in his playing days. He also speaks glowingly of the brother of an absolute Wolves legend.

His long question-and-answer piece is brimful of memories, not to mention the recollection of a crazy stunt pulled by a Wolves defender of the time!

David Instone’s meeting with Mike Summerbee constitutes ‘The Big Interview’ in the latest issue of the publication and there are Wolves links in that piece, too, mainly comprising the Manchester City star’s contretemps with and subsequent plea for Dave Woodfield in 1965 and his captain’s role in the 1974 League Cup final.

In a separate article, there’s a further insight into the love Summerbee’s big mate George Best had of Wolves in his formative years.

Still on a showbiz theme, what about the page three girl whose dad and grandfather both played for Wolves and whose husband was an England international?

Smaller pieces on Emlyn Hughes, Andy Gray and John Burridge, plus obituaries of Jack Taylor and the former Molineux duo of Phil Kelly and Alan Steen, underline Backpass as a publication not to be missed in these parts. 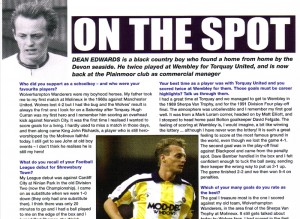 There’s even a colour picture of John Richards’ dramatic late Wembley winner against City, Summerbee and all, in 1974.

The 64-page glossy magazine costs only £3.95 and is available from most WH Smith high street and travel outlets, plus McColls shops and selected Sainsbury stores.

Alternatively, please click on the Backpass advert on the right-hand edge of this page. The publishers also still have copies of many of the past issues.