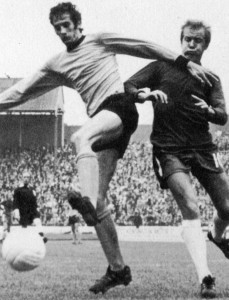 John Holsgrove shields the ball from danger in Wolves' 2-2 draw at Chelsea in September, 1969.

Monday, September 24: Had a lonely visit today to Oxley Park Golf Club for what should have been the Wolves Former Players golf day. I didn’t get out of my car, having been greeted by a ‘course closed’ sign at the entrance as the rain lashed down, monsoon-style. The event was cancelled at 7am apparently, at the insistence of Oxley officials –  and the puddles on the practice putting green showed they were right to do so. The handsome array of players are now reconvening in early November.

Thursday, September 27: I always enjoy interviewing John Holsgrove and was pleased to get some new ‘angles’ out of him today when speaking to him at length about an article for the Wolves v Crystal Palace programme next week. Arsenal, Tottenham, Chelsea, Palace, Arthur Rowe, Harry Redknapp…….his career touched some famous places and names before he even made it to Molineux in the mid-1960s.

Sunday, September 30: Have to say I’m impressed with Mel Eves’ column in the Sunday Mercury. Much as I have always enjoyed hearing Mel’s views, I never assumed he would be outspoken enough to be a compelling columnist. But his opinions in print, plus the knowledge gleaned from his close contact with the game, make him very readable. He has been penning his words for most of the season and proved himself a thought-provoking writer.

Tuesday, October 2: Three for the price of one in the Molineux press room tonight……not only was Matt Murray on duty, Steve Froggatt was also back here for the visit of Crystal Palace as a summariser for BBC Radio London and Andy Thompson wandered in at one point with his son to exchange greetings.

Friday, October 5: Have heard that George Friend – one of Mick McCarthy’s signings in the 2008-09 Championship-wining season – is making plans for his post-playing days. He has enrolled on the media course Lawrie Madden helps run at the Staffordshire University in Stoke. Friend, who has played 12 games for Middlesbrough this season after spending two years at Doncaster since leaving Wolves, is also doing some work with local radio in the north-east.

Tuesday, October 9: Michael Gray was never the most willing of interviewees in his time at Wolves but he seems to be media-friendly enough these days. Judging by his match-day ‘gigs,’ he appears to have his feet well under the table at BBC Radio 5 Live. We bid each other a quick hello in the press room at the Stoke v Manchester City game recently. 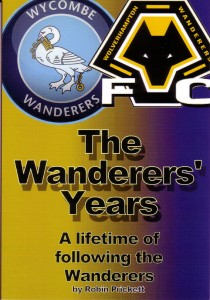 A new offering for Wanderers fans.

Saturday, October 13: Have been thumbing through a new book, called The Wanderers Years. Only 39 pages long, it is an account of author Robin Prickett’s decades of following his two favourite clubs, the two WWFCs – Wolves and Wycombe.

Wednesday, October 17: Had a trip down the Thames Valley/M40 corridor of my own today and failed in a search prompted by John Humphrey. In an article on this site two and a half years ago, John referred to having played junior football for Bourne Hall, the same boys’ club that Stuart Pearce and Gary Waddock grew up playing for. I set off with camera and notebook in the hope of compiling a feature for Backpass, only to draw a complete blank despite enquiries with local sports organisations, officials of other clubs and newspapers. You can’t win them all……

Friday, October 19: Witnessed the sick-to-the-stomach reaction of Dave Jones and co-commentator Don Goodman, a former Elland Road ball boy, to the appalling scenes Sky Sports screened from the Sheffield Wednesday v Leeds game. It hasn’t been a good week for our game.