Crossing Paths With The Stars 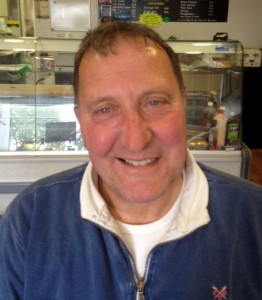 Every so often, we are reminded of a name that is no longer part of the collective Molineux consciousness.

Sometimes, as in this case, it is one that was not well known in the first place but was nevertheless attached to a career that had such highlights so early as to make you wonder where and why it tailed off.

Doug Griffiths didn’t make Wolves’ first team. His flickering promise – if a brawny centre-half can accurately be described to have such delicate qualities – took him as far as the Central League side and onwards to a satisfactory stay at Stockport. Then, misfortune played a part.

But the follow-up has been fulfilling at lower levels of the game, with an invitation from Harry Redknapp to join him in America, some table-topping jousting with Martin O’Neill and no fewer than three decades of non-League service.

What with his accomplishments in captaining the England schoolboy side before all that, Dougie and I had plenty to talk over when we met at the Dyners café run by his sister in Rednall, a few miles south of Birmingham. Fittingly, we decided to start at Molineux and even earlier…..

“While I was in the Wolves A team, we played Alvechurch when they a village team,” he said. “It was before they had players like Alan Smith, David Kelly and Graham Allner and went up through the leagues.

“I also played with Graham in schools football. I was at Kings Norton and he was at Erdington, a year behind me. I think they might have won the English Schools Trophy.

“I captained England schoolboys in 1963 and my room-mate was Trevor Brooking. The others who made the grade from the team were Roy Evans, Colin Suggett and George McVitie.

“I went through all the trials, including the final one at St Andrew’s. We beat Ireland in one international at Reading and I was left out of the next game, against Wales. The manager came into the toilet to tell me: ‘We’re leaving you out. You didn’t play very well.’ We had just won 9-1!

“Then we drew in front of 68,000 against Germany, when I was substitute. I went on about 15 minutes from the end on the Monday or Tuesday and scored the equaliser two minutes from time from a penalty. Then we faced Scotland at Dundee and played against Eire.”

The young Griffiths was hot property. He plumped for Wolves but the competition for his signature was fierce.

“I had 15 clubs after me, including West Ham and Tottenham,” he revealed. “I met Ron Greenwood and Bobby Moore at Snow Hill station in Birmingham. The following week, Spurs invited me down there when they were playing at West Ham.

“It was the great Spurs side. I went into their dressing room and, when I came out, Greenwood grabbed me. I still have the programme, autographed by Danny Blanchflower, Bill Nicholson and Greenwood.

“I started in the seventh team at Wolves and worked my way up to the reserves. I turned professional at 17. I never made it but I remember Ronnie Allen saying I was a good professional. I never drank more than shandy until I was 21 and have always kept the good habits I was taught at Wolves.

“Mike Bailey rated me because I was a hard tackler. I once flicked through Derek Dougan’s legs in a practice match and clipped his ankle. He went down and Ronnie sent me off, saying: ‘I want a fit team for Saturday.’

“Years later, when Derek was at Kettering and I was with Leamington, he asked how I was getting on and whether I was going to kick him! I caught him a quarter of an hour from the end and he went off. I don’t think he wanted roughing up at that time of his life.

“I had some good players ahead of me at Molineux like Dave Woodfield, who was the hardest trainer I knew, Graham Hawkins, John Holsgrove and Dave Galvin, who were also a bit older than me.

“John McAlle was an inside-forward and I think it was Gerry Summers or Ron Bradley who thought he could make a defender. It’s strange that he and Frank Munro were originally inside-forwards, yet went on to play so many games together for Wolves as central defenders.

“I used to have lunch at Lyons tea room in the town centre with Doog and Bobby Thomson, who took me under their wing. Alun Evans was my best man and I went up to Liverpool when he signed for Bill Shankly and Joe  Fagan.

“Alan Harris and Brian Thompson were other mates. I always used to be invited along to various things with the players, though, and must have made some kind of impression on Peter Knowles, who I remember coming back to train with the youngsters in the afternoon.

“Four or five years ago, we had some Jehovahs at the door down here and I told them I’d played football with Peter. The following Christmas Day, he rang at night while we were with my brother-in-law and mother-in-law. I chatted to him for an hour. My missus had to come and get me off the phone.”

The mid-1960s Wolves were adjusting following the departure of Stan Cullis and rebuilding, initially in the Second Division.

Just as so many good players had failed to break through into their first team in the 1950s, though, so Griffiths found his way barred by the quality around him.

“I would guess I played a few dozen games in the reserves and recall Mike Bailey writing some nice things about me in the Sports Argus once,” he added. “It was around the time I played a Central League game at Burnley.

“Everything was special for me when I pulled on a Wolves shirt. There were always people around to encourage and advise you.

“Ron Flowers, who was a real class act, used to tell me I gave the ball away too cheaply, although I could win it well enough. I certainly didn’t have his skill but it wasn’t for the lack of trying. Ronnie Allen was a great coach, so were Ron Bradley and Gerry Summers. 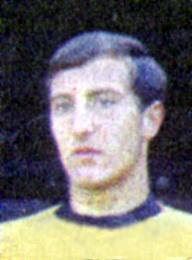 Doug in his youth at Molineux.

“I was at Wolves from 1964-68 but got squeezed out and went to Stockport for the next two years. I could have gone to Peterborough or signed for Tommy Docherty at Rotherham.

“Dave Cooke, who I played with in the reserves, went to Stockport with me. We played in two trial games against Morton and Derby and obviously both did well enough.  Brian Clough was Derby’s manager and we beat them 2-1 in an end-of-season friendly. Cookey stayed for half a season, then went to Fleetwood. He scouts for Sam Allardyce  these days and lives down south.

“I was in digs with Freddie Goodwin’s mum in Worrall Street near Edgeley Park. I had long hair in those days. In my first season, I broke my collarbone and suffered a compound fracture of my thumb when I collided with the Crewe goalkeeper. They thought I had a collapsed lung and I was in the infirmary for a while. It was like a car accident.

“Then I did my ankle against Tranmere in my second season and, although I got back in the team, a bit of my bone kept collapsing. That was about the end of it. I did sometimes go in a bit kamikaze!

“We finished about sixth in the Third Division in my first season and were relegated in the second.

“I remember we were on TV twice. Once when we lost by the odd goal at Orient and another time when we played Fulham and our manager Walter Galbraith told us to deal with Johnny Haynes by picking him up with the nearest man. He reckoned Johnny was past it but we were three down at half-time and he had taken us apart. The gaffer came in and bollocked us by asking: ‘Who’s meant to be marking Johnny Haynes?’

“I came back to the Midlands and probably played my best football. I had three seasons at Rugby Town, four at Leamington and two at Bromsgrove before becoming assistant manager. I was also assistant for a season at Worcester and had about three months in charge there before Martyn Bennett took over. Earlier, I had played in the Birmingham Senior Cup final at Highfield Road as well against Atherstone.”

The crossing of paths with the famous hadn’t ended with his drop out of the League. Nor with his switch to driving a dust cart for decades.

“Harry Redknapp had a spell with us at Leamington in between his seasons with Seattle Sounders and he wanted me to go to America with him. That would be in the second half of the 1970s.

“He told me to go but I didn’t give it that much thought and stayed here. I thought I needed a proper job and hadn’t been ‘on the dust’ very long. I drove for Birmingham City Council for 36 years – mainly round the university and hospital. I was also playing non-League and it left me the time for my football.

“I played at Bromsgrove for Bobby Hope and became his assistant. We built some great teams and were runners-up to Wycombe in the Conference when Martin O’Neill was manager there. He eventually went to Burton and I went to Worcester. We had a long time together.

“I signed Martin O’Connor, then went and managed Solihull and Moor Green. I had been out of it for four or five years before Graham Allner got in touch with me last year near when I was turning 63 and I went in at Alvechurch.

“I didn’t make much from the game but I was a bit unlucky. I had that determination as a centre-half, although I played at right-back as well.

“I faced Malcolm Macdonald and Bruce Rioch with Stockport (against Luton) and was a team-mate of my hero, Peter Broadbent, at Stockport. What a brilliant player! He was never a shouter or bawler. You just quietly respected him.

“Around 15 years ago, I had a tip-off about a player and went and watched him in a Bristol City reserve game at Clevedon. I sat next to Harry and remember him telling me what a good player he thought Joe Cole, who was only 16 then, was going to be. 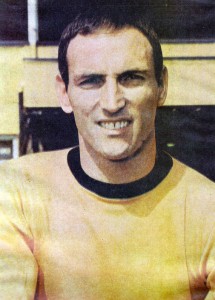 “I have always been a happy bloke but can understand why some lads crack up if they don’t make the grade. I remember reading about some who have committed suicide when they have fallen by the wayside.

“I had parents who wanted me to do well and, yes, it was a massive disappointment for me that I didn’t make the grade. But we all realised it wasn’t the be all and end all.

“I’m more aware of that than ever now. I have had some health problems, including prostate cancer, and have had two operations. I’m praying to God that everything is okay now.”

The story turns full circle. Griffiths’ work with Alvechurch these days is as director of football and he helped steer them away from danger near the foot of the Midland Football Alliance last season and into a healthy mid-table placing. They are in a similar position now.

Football is still very much in the blood and he’s busy passing on the good habits he was proud to have been taught at Wolves.