Not A Patch On The Past! 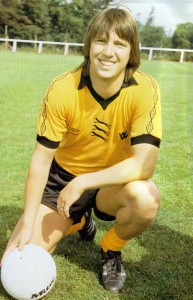 The young Patching at Castlecroft.

Martin Patching has had an evening of pure nostalgia to further boost his recovery from serious illness – amid recollections of how he stepped from behind the bar to embarrass Alan Hansen and Bruce Grobbelaar.

The former Wolves forward, who was once considered to have only three months to live, has been all-clear since 2009 from the non-cancerous brain tumour that required two big operations.

And he had another perfect tonic over the weekend when invited to Vicarage Road for a 30-year reunion of the Watford side who finished League Championship runners-up to Liverpool.

Patching was joined by two other former Wolves men of a different generation, Graham Taylor and John Ward, as well as the likes of Luther Blissett, Steve Sims, Kenny Jackett, Steve Sherwood and Steve Terry.

“It was a really enjoyable night,” he said. “Tickets apparently sold out in two weeks and the only problem was that all the players sat together and it was difficult finishing our meal. So many items of memorabilia were placed in front of us.

“But it was great to see so many of the lads again. It must be ten years since any number of us were together – that was for a charity cricket game down there.

“The stories flowed and we were invited on stage in twos and threes to answer a few questions. Graham Taylor got a big hand as well when he stepped up to make a speech.”

Difficult though it now is to comprehend, Watford finished above Manchester United and Tottenham to provide the closest challenge to Liverpool in the 1982-83 season.

Although they were fully 11 points behind Bob Paisley’s team of serial League champions, they made sure of runners-up spot by beating the already crowned Merseysiders 2-1 at Vicarage Road on the final day of the season.

And Patching, who had made his Wolves debut as a substitute as a 16-year-old in a 5-1 home win over Sheffield United in the autumn of 1975, had a special tale to tell from that memorable afternoon.

“At the time, I was running a pub, the Red Lion in Berkhamstead, so you can imagine all the headlines when I scored!” he added.

“I had just announced my retirement at the age of 24 because of serious knee trouble and was going into the licensing business. I wasn’t exactly serving the night before but the press were full of puns about Roy of the Rovers.

“It was Bob Paisley’s last game in charge and I pushed the ball through Alan Hansen’s legs and knocked it past Bruce Grobbelaar to score our first. Luther Blissett got the second.

“We just had to better what Manchester United did that day to finish second, which is a sensational achievement for a club like Watford. The sadness for me is that I only played three games in the season because of injury.

“Around the October time, I’d played at right-back in a 2-2 draw against Norwich and a 3-0 defeat at Aston Villa, where I was marking Tony Morley and he scored two great goals. 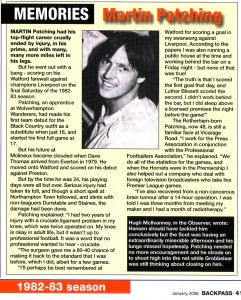 And as featured in the Backpass magazine almost five years ago.

“Sadly, that was it. My knee just wasn’t up to playing professional football any more. But what a way to go out!”

Patching, whose first full Wolves game came in a defeat at Arsenal in April, 1976, played 101 times (with 11 goals) while at Molineux, where he had played in an FA Youth Cup final and won England Youth caps.

He also had a loan spell at Northampton but the battle to save his career is dwarfed by the uphill fight through which he has come in recent years.