Down To A Tee

Jokes, Golf And A Big Pay Day For Charity 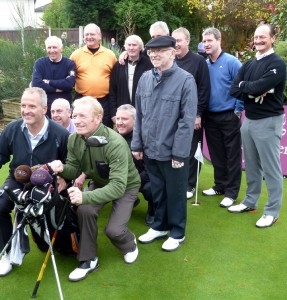 ‘Where’s Gouldy?’ asks Phil Parkes an hour or so before the first ball is struck. “Is he scared I’m going to nut him again?’

Lofty, just back from playing five rounds of golf during a three-week holiday in Orlando, has caught up on the news that Bobby Gould is otherwise detained.

The popular keeper is in good fighting form but concedes quietly as he retreats to the locker room: ‘Nah, he’s all right, Bob…..he just got under my skin in that game against Arsenal!’

Derek Dougan once said that the first thing ageing footballers did when they met was ask each other about their knees and their grandkids. Correction: That’s the second and third things they do. The first priority is to take the mick out of each other.

Next in line is Willie Carr. “Look, you’ve got less weight on you now than when you were playing,” says one of his playing partners as some 1970s photographs of him are handed to him for signing.

It’s barely nine o’clock on the morning of the Ex Wolves Charity Golf Day at Oxley Park, Wolverhampton, and the barbs are flying.

“Jim, have you held on to those trousers in case they came back into fashion?” enquires Robbie Dennison, one of three representatives in the field from the 1980s-1990s generation.

Andy Mutch has driven down from Southport to be here and is beaming after his recent naming as a New Year Wolves Hall of Fame inductee. Steve Bull, also present, must have had something to say about that along the lines of: “Looks like they’re letting anyone in now.”

Dave Wagstaffe, adamant that he hasn’t played golf for two years, takes similar congratulations over his impending honour and rebuffs them modestly: “A lot of us will be in there eventually, won’t we?” 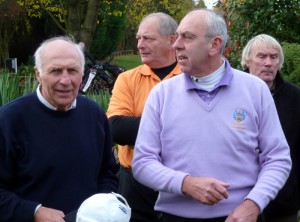 Mike Bailey (left), with Geoff Palmer. In the background are Steve Kindon and Dave Wagstaffe.

In the clubhouse, faces occasionally disappearing behind bacon baps, Terry Wharton and Mike Bailey are locked in conversation; a Cullis survivor re-meets a McGarry heavyweight. The crossover between the two was the Ronnie Allen era, promotion, America and all that.

Bailey still commands such respect. After I chat to him for ten minutes for an article in Saturday’s match programme – he’s coming back for Wolves’ game with Brighton (another of his former clubs) – MC Steve Kindon is on his feet making anouncements.

Wharton would later engage those in earshot with the teaser: “Who were the five players whose names began with W who played at the club together and all appeared in the Wolves forward line?”

“You and Waggy for a start,” we chorused. “And Wignall?”  “No, not Wignall,” he answers. Wow, this might take time!

Kenny Hibbitt would have walked off with the Best Dressed Player prize had there been one, pipping Waggy into last place! Well, the Yorkshireman who is now resident in the West Country is serious about his golf.

He achieved his ambition of keeping a scratch handicap past his 60th birthday (yep, he’s 62 early next year) – and the game runs in the family. His son’s a professional.

Alongside Hibby’s black and white ensemble, Kindo has gone for pragmatism. He’s in a gold polo shirt. “And if you think I wore this at the Burnley golf day recently, you’re mistaken,” he booms.

A month and a half ago, monsoon conditions washed the event out. Main organiser Steve Daley is thrilled that not one team have dropped out for this late-year rearrangement. He even has a ‘bonus’ team – whether he wanted one or not.

“I’d just done all my sums and timings, then Phil Nicholls walks in with his team,” he reveals. “I must have forgotten all about them.

“That’s 23 teams we’ve had out there, brilliant! It’s about seven years since we held this. I think we can say now that it’s going to be held next year as well. We had to turn teams away.”

Mel Eves arrives slightly late, uncertain about having the time to play but wanting to show support anyway. He disappears for a few hours to make work calls, then returns for the presentation dinner.

Back to Wharty…..’was Paul Walker among them?’ ‘No, he was quite a bit later.’ ‘Ah Woodruff! That’s three’

Some four hours later, the competitors are returning. The weather has blessed us. It has been a great day.

Daley announces that the team containing Nobby Stiles have won – the 1966 World Cup legend is here because his son John is providing the after-dinner comedy turn.

“And that’s despite us giving him a night on the Peroni,” he smiles. “We took him to the Crown on the Wergs Road when he stopped over last night.”

“That’s all we need,” someone pipes up……. “another soddin’ Manchester United away win.” 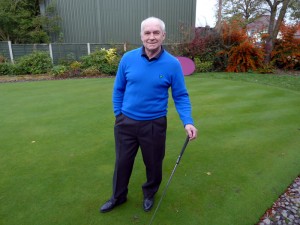 “Was the other ones Woodfield and Les Wilson?” “Yes, you’ve got it!” Cue much stick for Wharton: “Woodfield was a defender – and Wilson wasn’t a forward. What sort of a question’s that?”

The jibes continue and Kindon is still being baited for having pulled out of the competition itself because of a bad back; yep, he had one of those at Wolves 40 years ago as well.

Several thousand pounds has been raised to split among Compton Hospice, the Air Ambulance and the breast cancer charity.

It will all happen again next year. Keen golf and good food and drink. And plenty of ribbing. It’s what former footballers do.