Booked In For An Appearance

A Signing At Wolves 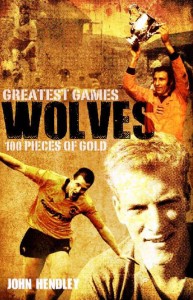 Several of Wolves’ high-profile first-team players are due to turn out in support later this month of the newly-published book by club historian John Hendley.

‘Greatest Games: 100 Pieces Of Gold’ is now on sale through Wolves’ various retail outlets and in selected high street locations.

And the marketing effort is being backed in full from inside the Molineux dressing room – at the suggestion of Stale Solbakken’s squad.

Kevin Doyle, Kevin Foley and skipper Karl Henry are pencilled in for a signing session in Wolves’ city centre store a week on Monday (November 19), with an early-afternoon ‘kick-off.’

The hard-back book, produced by Pitch Publishing, covers a hundred games from the club’s very first one in the Football League (a 1-1 draw at home to Aston Villa in 1888) to another draw two seasons ago – the televised Premier League classic against Tottenham.

Any number of cup and European conquests are covered as well, with the background and significance of them outlined in detail as well as the action on the pitch.

The foreword has been written by Derek Parkin, the club’s all-time record appearance maker and therefore a man who figures heavily in the text.

“Colour, as well as black and white, photos appear in the book and I’ve worked hard to find some highly original ones,” said Hendley, also the author of the Wolves Miscellany book.

“I’ve come by another on from the 1908 FA Cup final, via ebay, and also love one I’ve found of Johnny Hancocks scoring in the snow against Huddersfield.

“Completing this book, which has been in my mind for many years, has been a long job but I hope fans will enjoy reading it as much as I’ve enjoyed writing it.”

Further information on 100 Pieces Of Gold is available on request from us at Wolves Heroes.