Memorable Opening Night At The Museum

Something – And More – For EVERY Wolves Fan 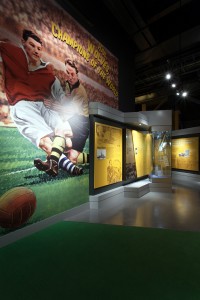 From near one of the far walls, a cheer goes up. It’s Jim McCalliog, his wife Debbie and one or two former team-mates. Jimmy Mac’s shot has just gone in under Pat Jennings for Wolves’ equaliser in the home leg of the 1972 UEFA Cup final.

A few yards away, Malcolm Finlayson is re-watching footage of the 1960 FA Cup semi-final and final. “Amazing,” he says. “Norman Deeley has just scored at Wembley and everyone has just trotted quietly back to the half-way line except possibly Barry Stobart. He has just given him a quick hand-shake first. No other fuss.”

Ron Flowers’ World Cup winner’s medal – kindly loaned in considerably quicker time than it took he and the other fringe 1966 squad members to be suitably honoured – is attracting quite an audience, too, near the entrance.

It’s opening night at the Wolves Museum and we’re like kids in a sweet shop. We don’t know which way to turn.

Almost 500 items of memorabilia, from boots, shirts and balls to programmes, menus and photographs, are on display. But it’s the keepsakes we haven’t seen before, or at least not at Molineux, that underline the first such facility in Midlands football as a high-quality addition to the ‘stadium tour’ culture.

Twenty-two touch screens show either footage or old programmes and newspaper cuttings, or a mixture. This is state-of-the-art presentation and displaying of decades-old treasures. And you don’t have to have lived through any of it to find something of interest.

The children among a 100-plus turn-out on first night are captivated by the chance to take penalties at Phil Parkes and Mike Stowell as if on a Wii. A little girl is testing her reflexes as ‘Wayne Hennessey’ looks down at her.

The museum, all 600 square metres of it, opens tomorrow to season ticket holders and members. From Saturday morning, the general public will be admitted. Before long, groups of school children will be filing through, learning not only about Wolves’ glorious history but also being briefed in a special education room about diet, fitness and other key areas in the grooming of successful young footballers.

“Once we get youngsters coming here, we will be capturing them forever as fans,” said Wolves chairman Steve Morgan in his opening address. “It’s very much a long-term project. 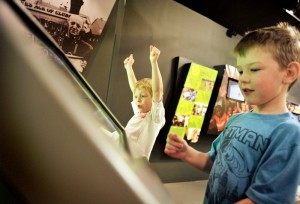 Kids will love it!

“Wolves is a club with a fantastic history. It’s well known I used to be a Liverpool fan but I remember Wolves being the greatest club team in Europe and probably the world.”

“It’s an opportunity to say thank-you to these legends – and those who will go into it in the future – and pay them a proper tribute,” Morgan added.

We wound our way, maybe two or three times, past the Wrekin Cup, the special sections about Billy Wright, Stan Cullis and Major Buckley, and that nostalgic old South Bank turnstile, finding new material each time.

A pre-war letter from the Major to Mr Simpson at Madeley Senior School shows, in careful hand-writing, how the club politely requested that ‘the lad Wright’ be sent to the ground the following Monday for the start of his record-breaking career.

My eye was caught by the diary of a Wolves tour of Europe the same year, thought to have been written by full-back Frank Taylor, in which the author records: “Marvellous town, Budapest, girls the prettiest in the world.” He says of Vienna: “Nazi flags in every shop. Everyone wears a badge. When people meet, they give the salute and say: “Heil Hitler.”

Suddenly, amid the compliments about the local tea and coffee comes a sting in the tail: “I learned that four of our players had been in jail last night. After the banquet, they had gone out drinking and got run in for something, chasing girls……”

Wolves chief executive Jez Moxey rightly describes the museum as a ‘major new visitor attraction’ in the city and underlined it as a moveable feast. There may be 482 items on show but no fewer than 25,000 have been catalogued by archivists and three times that number are still to be sorted. In other words, the displays will be changed, especially to mark special occasions such as next year’s 25th anniversary of the club’s Sherpa Van Trophy triumph. 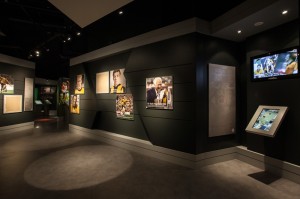 Treasures round every corner......

Whatever you do, DON’T drop into the museum for half an hour. Allow half a day. It’s a real Aladdin’s Cave.

We didn’t have to pay to get in but few would argue with Steve Morgan’s justification of the £7 admission charge. “Compare the value for money with a cinema ticket,” he said. “Well…..there isn’t any comparison. I couldn’t get my kids out of here.”

* Please also visit the article we were asked to provide for www.wolves.co.uk and check out www.wolvesmuseum.co.uk for further details.