Jimmy Mac Is Back

Forward’s Return To Arena He Graced 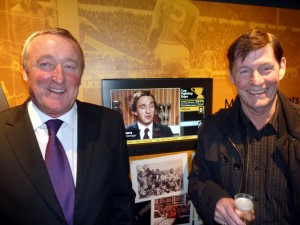 Jim McCalliog and Derek Parkin at the new Molineux museum....with Bill McGarry still keeping an eye on them!

Jim McCalliog has completed a nostalgic three-night stay back in Wolverhampton by going to a match at Molineux for the first time in nearly 40 years.

The Scottish international stayed over in the city with wife Debbie after attending Thursday night’s official opening of the club’s new museum and took in the home game against Nottingham Forest before setting off for home this morning.

And, although disappointed by the result yesterday, he departed with good memories – and a promise that he wouldn’t leave it as long next time!

“Once I’d got over the confusion of trying to imagine where the stands used to be when I was playing for Wolves, I enjoyed the game,” McCalliog said.

“Richard Skirrow and Jez Moxey kindly fixed us up with tickets in the directors’ box – and that was a first because Bill McGarry would never have let us watch from in there!

“The result wasn’t the one we wanted but there’s a lot to be encouraged about and these things take time. Hopefully, the side will turn the corner with a few wins soon.”

The 66-year-old Glaswegian met up yesterday with Forest legend Frank Clark, who was a Newcastle defender when he best knew him, and was hard pushed to recall whether he had seen a game since the 1970s at the club for whom he made 210 first-team appearances from 1969 until just after the 1974 League Cup final.

What we do know is that Jimmy Mac returned with Southampton for a Second Division game in 1976 on which promotion-bound Wolves suffered a painful 6-2 home defeat. But was that his last visit for a match?

“I don’t know whether I ever came back to play in a testimonial but I certainly didn’t play at Molineux for Manchester United,” he added. 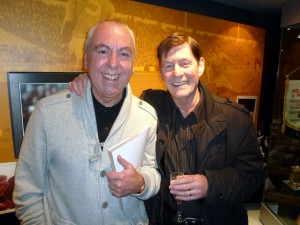 “I came back for Derek Dougan’s funeral a few years ago and when Frank Munro died last year, so I’d had a look around that fantastic stadium. I also saw Wolves play a friendly at Celtic a couple of summers ago but I can’t have seen a match at Molineux for more than 35 years.

“It has been quite a nostalgic weekend, what with going round that fabulous museum as well and seeing quite a few of my former team-mates there.

“I also took Debbie to show a few of my old haunts. We went round Tettenhall and Compton, where I used to live and hang out, and had a lovely meal at The Crown on the Wergs Road.”