(That’s To The Very Concept, Not Just To The Players Honoured) 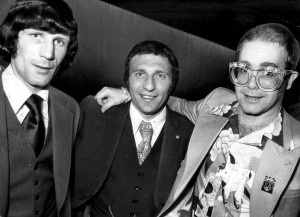 A star attraction for Dave Woodfield (left) at his testimonial celebrations......Elton John was quite a pull as well!

Testimonials aren’t what they used to be. No longer, thanks to today’s bulging wage packets and the cossetted existence of the players they belong to, are they necessary or even appropriate.

They used to represent one last pay day before popular, often down-trodden stalwarts stepped out into a less certain world – and they usually produced exhibition games packed with goals.

Now, if they take place at all, at higher-division clubs at least, these games are for men who require little financial help – hence the generosity of Matt Murray in making charitable causes the beneficiaries of his day in the spotlight.

We take a detailed look here at testimonial matches of the Molineux past and will be returning in the coming weeks with a part two…..

It’s perhaps surprising that only 14,466 attended this celebration of the Molineux lives of these two grand servants – men who surely did have gold and black coursing through their veins.

Seven of the duo’s former playing colleagues were involved, as were Tom Finney and Terry Hennessey, the younger man a relative of current Wolves keeper Wayne. Ted Farmer scored a hat-trick for Wolves, for whom Jimmy Murray was the other marksman, and Albion’s Derek Kevan netted three times for the internationals.

Express & Star veteran Phil Morgan reported that this game took place 14 years to the day after Broadbent made his debut for the club.

The man himself was by now with Shrewsbury but scored twice on his night in a side also containing Ronnie Allen and none other than Nat Lofthouse. They were outshone in the goal stakes by Jimmy Mullen, though – he hit three.

Derek Dougan, then still with Peterborough, scored twice for the all-star line-up, for whom Shrewsbury’s Arthur Rowley was up front. Nottingham Forest’s former Molineux winger Alan Hinton was in attack and Wolves youngster Jim Barron in goal.

The E & S didn’t give an attendance figure.

Goals were in plentiful supply for a 21,021 attendance when Ron Flowers skippered Wolves to an 8-4 victory over an England XI on his big night 42 years ago.

No lesser a figure than Gordon Banks was the man who had to pick the ball out of his net the most frequently, with Flowers getting one of the goals against a side who also contained Bobby Moore, Jimmy Greaves and Molineux full-back Bobby Thomson.

Flowers was by then manager at Telford, where Phil Weir was among his charges, and the young former Molineux keeper had the thrill of playing in the Colours v Whites preliminary match which featured many of the club’s 1950s greats and in which a 15-year-old Kevin Charlton was in goal at the other end.

Weir was unable to keep out a Johnny Hancocks penalty – apparently rather kindly awarded by referee Joe Gardiner!

In the continued after-glow of Wolves’ first League Cup glory, 14,625 were present on a night that started with Ronnie Allen hitting the winner for Albion in a match between the Black Country neighbours’ old boys.

Wolves had Elton John in their line-up and there was talk of the Watford chairman’s mate Rod Stewart appearing as well, although he ultimately couldn’t show. Another musical legend did play, though, namely Wolves fanatic Robert Plant.

The fixture fell on the day that Frank Munro was named in the Scots’ World Cup 40 and came three days after the end of the League season. Wolves had won five, drawn two and lost one of their final eight home matches – a further boost to the gate perhaps for a man who had left Molineux almost four years earlier.

If Wolves’ players were feeling a little ‘leggy’, they had good reason. They had followed the end of a long season by winning at Walsall the night before in a testimonial for Stan Bennett.

John Richards, who had twice beaten Mick Kearns at Fellows Park, equalised against the International XI (yes, it’s them again!) after John McAlle’s own goal. But Trevor Francis condemned Wolves to defeat late on.

In front of a 13,901 crowd who created proceeds of £8,000, there was the thrill of a substitute outing for Stuart Garnham in place of Phil Parkes while Derek Dougan’s departure brought the surprise appearance of Alan Buckley. And the interesting changes didn’t end there. For the internationals, Gary Pierce went on for Peter Shilton and Jim McCalliog (then with Southampton) replaced Bob McNab, who was to move to Molineux soon after.

What a pity that the match played as a tribute to the man who scored 123 Wolves goals failed to produce one at either end.

Wolves were generally short of them and, with a defeat at Derby shortly before, had gone more than 12 months without an away win as they headed towards relegation. Maybe that’s why Bill McGarry was linked with a move for Celtic and Scotland winger Jimmy Johnstone.

Nevertheless, The Doog’s popularity was underlined by the fact a whopping 25,658 turned up to bid him farewell and he went the nearest to scoring when he saw a header cleared off the line by Mike Pejic.

The 37-year-old Ulsterman, who lost a boot and his no 10 shirt to souvenir hunters when the pitch was invaded at full-time, was up against some interesting opponents. Revie had two future Molineux signings, Dave Thomas and Alan Dodd, in his side, who were captained by England skipper Gerry Francis.

Club opposition at last! Coincidentally, this game was played a year to the day after Dougan’s and came just after Wolves and Albion had swapped divisions, although Sammy Chung’s Wanderers were destined to return immediately to the top flight.

Wolves had an additional weapon for a line-up who were sweeping aside virtually all before them in the Second Division – boyhood Wanderers fan George Best.

The crowd figure was again impressive at 19,733, generating receipts of £11,510, and they were thrilled by the two goals Best put past John Osborne after Willie Carr had opened the scoring in a comprehensive home win.

The Manchester United legend wasn’t the only national icon on view. Bobby Moore also offered his services for the night and played the full 90 minutes. 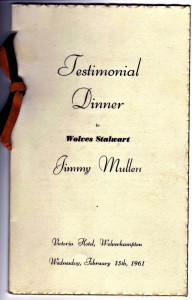 A keepsake from when Jimmy Mullen was being feted by the people of Wolverhampton.