JR And His New Shelf Life 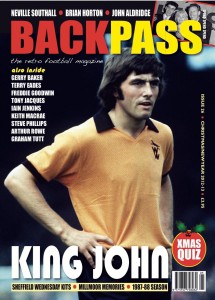 Wolves fans have much on which to feast their eyes in the latest issue of Backpass – and won’t have far to go to start finding it.

For the first time, gold and black are the dominant colours on the cover of the highly successful retro magazine, with Wolves Heroes co-owner John Richards the man featured on the front page.

A two-page question-and-answer feature on him appears inside, complete with goal and celebration pictures from the 1974 League Cup final and another couple of ‘then and now’ images.

And, in providing this particular article ourselves, we have ensured that the content is much different to when he was featured nearly three years ago at the launch of the Q & A area of this website.

From a decade or so earlier in Molineux history, we have also provided a piece on Freddie Goodwin – one concentrating largely on his career in his home town of Stockport.

On the page opposite to that is a photo of Derek Dougan challenging Keith MacRae at Wembley 38 years ago while pictures elsewhere in the unmissable 64-page magazine show Billy Wright in his guise as Arsenal manager and John Ward alongside some complimentary words about him from the man who sacked him early this season as Colchester boss.

The Doog gets a mention in a nostalgic look at Rotherham’s former Millmoor home, part of which is written – with a nice family twist – by former Wolves utility man Martin Patching.

By far the longest article in the latest issue of the magazine is an extended interview with boyhood Wolves fan Brian Horton, who, perhaps surprisingly, has gone through his career without playing for or coaching at Molineux. 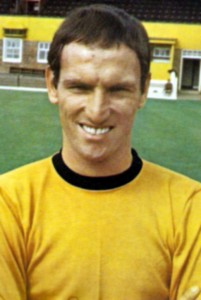 Backpass is now 26 issues old and continues to grow, so much so that a cricket off-shoot Backspin is now joining it on the shelves as a periodical.

Please either click on the icon on the right side of this page or try the link http://www.backpassmagazine.co.uk/ to learn more, in particular about ordering back copies.

A host of former Wolves players have been featured in earlier issues.