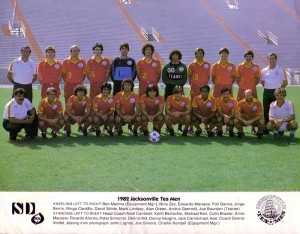 Colin Brazier, three along from coach Noel Cantwell towards the left of the back row, on a 1982 Jacksonville Teamen photo.

Colin Brazier assumed he had seen the last of Jacksonville when he flew out of the North Florida city with his Wolves team-mates in the summer before the ‘club in administration’ notices first went up at Molineux.

It was only when he was about to board another plane in England soon afterwards that he realised he must have made a big impact on American-based eyes.

“I was just about to leave for a fortnight in Madeira with my wife and her parents when there was a message over the tannoy,” he recalled this week.

“I wondered who it was chasing me and it turned out to be the people from Jacksonville. John Barnwell had taken us there at the end of the 1980-81 season for a game and a few days’ of holiday.

“We were well beaten but I must have had a decent game because they wanted me to get out there pretty quickly and sign for them.

“We didn’t have long to think about it, so we decided I should have a week away with the family in Madeira then fly back and go to the States.

“They wanted me to go and play a match straightaway, so I did that and then came back to collect some belongings before spending the rest of the summer playing for them.”

Brazier, who will be an interested observer from a distance this weekend when his first club (Wolves) face the one he supported as a boy (Birmingham), relished the great American adventure.

His experiences contrasted sharply with some of his frustrations in the West Midlands and left him wanting more, only for the game on the other side of the Atlantic to collapse as we know it after his second season out there and to become diluted by the growth of indoor football in its place.

Having been part of a Wolves side beaten 4-1 by Jacksonville in May, 1981, Brazier loved life with Noel Cantwell as his head coach and Dennis Viollett as his no 2 a few weeks later.

“Dennis was brilliant,” he added. “He was a pleasure to work with. There were a few other Midlands players out there like Keith Bertschin, Archie Gemmill and Bomber Brown and I was lucky enough to play against all the big stars really apart from Pele.

“I faced Gerd Muller, Johann Cruyff and Neeskens…….I even got sent off in the same game that George Best got sent off in just after my parents flew out for a holiday and to see me play!

“I thought I was a good player until I went out there and saw some of those guys play. 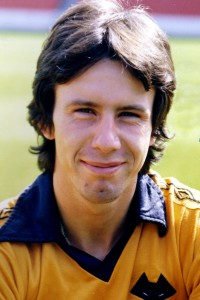 Brazier as Wolves fans will remember him.

“There were three Argentine lads at our club and one, would you believe, was called Jorge Berrio.

“If we had some time off, we wanted to go for a beer. If they had time off, they just wanted to go and kick a ball about. It was quite an eye-opener.

“I loved the whole experience……the big stadiums, the chance to travel around over there, the different kind of spotlight, the lifestyle.”

* We at Wolves Heroes were flattered to be asked to also interview Colin for the Wolves programme for this Saturday’s game. And we can promise the content for that extended article will be completely different.