Beeb Insight Into How Honved Were Humbled

Anniversary Look Back At Molineux’s Most Famous Night 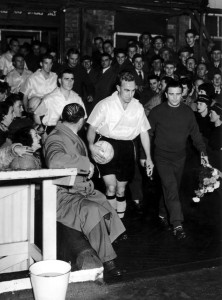 Into the glare of the still new Molineux floodlights come Billy Wright, ferenc Puskas and their teams.

Ron Flowers and Ron Atkinson have had the TV cameras whirring in their presence in the build-up to Christmas by reminiscing over a milestone Molineux date.

It is 58 years tonight since Stan Cullis’s side beat Honved 3-2 in probably the most famous game ever played at the stadium and the duo’s memories will be broadcast on the Thursday edition of BBC Midlands Today.

Flowers was visited at his home near Stafford by reporter Ian Winter and spoke about his unwitting role in the game’s opening goal and about his unusual journey to the ground – on foot in the company of the fans from the nearby digs he shared with Peter Broadbent!

It was the following year (1955) when the legendary wing-half won the first of his 49 caps for England but he was well aware of the national pride that was at stake as Wolves tried to regain some ground following the Hungarians’ two famous international wins over us in the early 1950s – one at Wembley, the other in Budapest’s Nep Stadium.

Atkinson’s role in the Molineux clash, which was watched by 54,998, is not one you will find in too many of the record books.

He was on the club’s groundstaff at the time and told the Beeb while at a lunch at Edgbaston several days ago of how he and other youngsters carried out Cullis’s orders to soak the pitch despite the already wet weather!

Supreme fitness was one of the virtues of the team who were making a strong and almost successful defence of the League Championship crown they had won the previous spring and the events of a dramatic floodlit night bore the point out.

Wolves trailed by two goals after only 14 minutes before hitting back to win 3-2, Johnny Hancocks pulling one back from a penalty just after half-time and Roy Swinbourne netting twice in the final quarter of an hour.

BBC Midlands’ look back at this momentous occasion doesn’t quite end there. They also dropped in at the magnificent new Molineux museum to interview lifelong fan Mike Crump.

He wants to hear the memories of other Wolves supporters about the match – whether they were there in person or followed the broadcast version – as he works on a project to mark the 60th anniversary of the game in 2014. 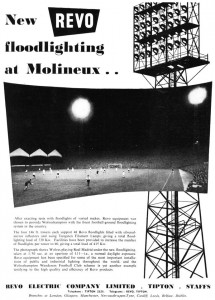 Some commercial bumph relating to the welcome addition to the Wolverhampton skyline.

Some three and a half minutes of film of the fixture survives and will form the basis of his work, to which Wolves Heroes readers are encouraged to contribute.

If anyone wants to contact us with their reminiscences or are willing to be put in touch with Mike, they are welcome to come forward and we will make the necessary introductions.

*For those who missed it, this feature should be available through the BBC website for much of Friday, December 14.