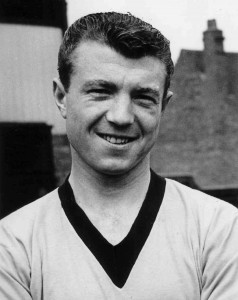 There’s a temptation to think that Wolverhampton Wanderers won every week in what has become fondly known as their glory years. Not so.

Page 82 of the 2002 book Forever Wolves shows Malcolm Finlayson floundering as he is beaten by South African Peter Hauser in a game played just over half a century ago. It is one of seven goals Stan Cullis’s side conceded on that embarrassing afternoon.

With a certain poignancy, the photo is of a match at Blackpool and shows George Showell – clad in the club’s all white change strip – powerless in the background.

As I write, Wolves are playing and winning at the same venue, although Bloomfield Road is completely unrecognisable from January, 1962, and, tonight, they are wearing black armbands.

Flags at Molineux have also been at half mast since Showell’s sudden passing at the age of 78 and a minute’s applause before the Boxing Day game at home to Peterborough will underline the point that we have lost a highly notable member of the Molineux family.

Here is a man who performed cameo roles in the winning of two League Championship titles before also playing in the 1960 FA Cup final victory over Blackburn. Not bad for someone who would not have gone on to achieve what he did at Molineux had he not been blessed with much patience.

When Showell was first blooded, at right-back in the 1-1 home draw against Preston in April, 1955, it was all but six years after he had signed for Wolves straight from school as an amateur in the wake of their 1949 FA Cup final triumph.

He became a professional two years later, signing on the same day as Ron Flowers, and didn’t have to look far from his roots for inspiration. In the other full-back berth when he was first named in place of South African Eddie Stuart was Bill Shorthouse. For many of his early games, Bert Williams played behind them; a remarkable story of three men from the small district of Bradley in Bilston lining up at numbers one, two and three for a side who just missed out on retaining their League crown.

By a further remarkable coincidence, of the 950-plus men who have represented the club in League matches, Shorthouse and Showell are next to each other alphabetically. And the last time I met George was at Bill’s funeral in the autumn of 2008, although he also came back fo a home game against Blackburn after that.

It took him almost ten years to reach the 40 mark in First Division appearances. Over the next six and a bit seasons, the figure shot up to exactly 200.

All told, he had 218 League and cup outings for his home-town club – it’s always worth qualifying that they are just what we regard as ‘competitive’ matches because players of that era inevitably also played some high-profile friendlies against the continent’s best.

In Showell’s case, those other games included a certain one against Real Madrid at Molineux in 1957, when he deputised for Wright and did a brilliant marking job on Alfredo di Stefano.

It was a performance that earmarked him as the eventual successor to the great Molineux and England captain. Indeed, Cullis’s belief that the younger man was ready to step into those golden boots is thought to have been a sizeable factor in Wright deciding to retire when he did in the pre-season of 1959.

Another item of Wolves literature shows Showell, again in change strip and this time at Molineux with a no 5 on his back, shaking hands with Wright before kick-off under the gaze of Jack Taylor. It was the occasion of the latter’s famous farewell in the Colours v Whites and the cue for the younger replacement to step forward. 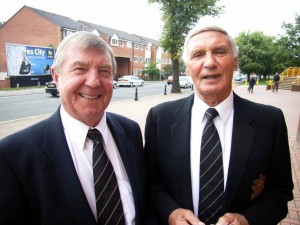 Back for Bill Shorthouse's funeral four years ago in the company of Eddie Stuart, who has also settled in Wrexham.

History would suggest Showell’s form subsequently went into a bit of a dip. Maybe the pressure of graduating from a stand-in centre-half to a regular one, especially in place of a man who was truly peerless, proved troublesome because the flow of goals against certainly increased considerably.

The upshot was that first Stuart and then Bill Slater were used instead as Cullis’ no 5, the England man so successfully that he remained there for the final 26 League and FA Cup games of a season that would end with him being named Footballer of the Year.

Amid this reshuffle, Showell was switched to right-back, another position in which he had previously filled in, and, to the anguish of the displaced Stuart, kept that shirt right through to the season’s Wembley showpiece and the 3-0 win over Blackburn.

Showell was a utility man long before the term was widely used. He also filled in on occasions at left-back and scored a late winner while wearing the no 3 jersey at Chelsea at the three-quarter stage of the 1957-58 title-winning campaign.

He was playing on the right wing at the time after being concussed and Cullis must have remembered how efficiently he put away his chance. When Jimmy Murray lost form the following autumn, Showell played four successive games at centre-forward – and scored against Arsenal and Birmingham in the first two of them.

My impression is that he was a shy man as well as the gentleman his surviving team-mates speak of. Above all, he was splendidly loyal to his home-town team. “Stan Cullis – he should have got a knighthood for what he achieved,” he said in an interview in recent times, momentarily overlooking the fact that the manager had some tasty players at his disposal.

Showell also played nearly 200 times in the Molineux reserves and fully deserved the opportunities and accolades that eventually came his way. He made six appearances for the club in the European Cup, including home and away against Barcelona, and figured in the side who beat Nottingham Forest in the 1960 Charity Shield.

With the exception of 1961-62, he was a regular from 1959 to 1964, his senior appearances dwindling markedly in the season Cullis was sacked. 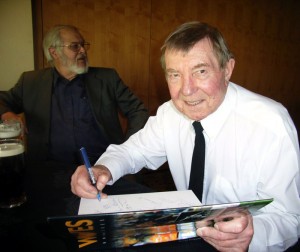 He admitted he was a little dubious when he cut his Molineux ties and joined Second Division newcomers Bristol City in 1965. A knee injury, plus the form of full-backs Tony Ford (unrelated to manager Fred Ford) and Alec Briggs, meant his appearances for the club barely reached double figures but he had the historical distinction of being their first used substitute when he went on for the legendary John Atyeo in a game at Manchester City.

He was an inaugural member of Wrexham’s Hall of Fame and there was only one option in the search for opponents when he was awarded a testimonial in 1991. It had to be Wolves.

George collapsed in a supermarket on Tuesday and died at the town’s Maelor Hospital, where he had worked as a pharmacy porter after also serving as a physio for the local rugby club and done voluntary work at a hostel for the homeless; another link with Molineux’s glorious past sadly broken.