Festive Message With An Insight Into How Christmas Used To Be

In wishing all our readers a wonderful Christmas and a happy, healthy New Year, may we also offer a reminder that we plan to be back on Thursday.

We are treating ourselves to a day off tomorrow and will be at the Wolves v Peterborough game on Boxing Day ready for a not-so-early return to duty on the 27th.

Christmas Eve or not, we have rubbed shoulders today with some Wolves favourites and look forward to bringing news of those brief city-centre meetings in the near future.

As we speak, we are also hoping for a Skype conversation with another former player who is now living abroad.

In signing off for three days, may we leave you with these snippets from the days when League football was not only only played regularly on the big day but also, especially in the 1960s, on Christmas Eve:

On December 24, 1966, Wolves stormed back to the top of the Second Division table after maintaining the upper hand in an eight-goal Molineux thriller against Derby. Terry Wharton (2), Bob Hatton (2) and Hugh McIlmoyle were the scorers.

On December 25, 1926, Wolves and Bradford City contested a relegation four-pointer at Molineux – and the home side went home to their turkey lunch much the happer. They won 7-2 thanks largely to five goals by Tom Phillipson, who later became the town’s Mayor. 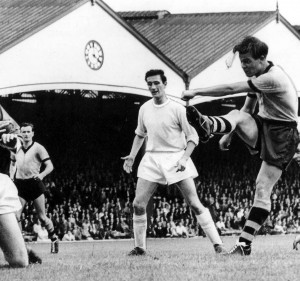 Ted Farmer torments Manchester City - and was on the mark when Wolves did festive battle with Aston Villa 52 years ago.

On December 25, 1934, Charlie Phillips was the goal hero as he netted three times in a 5-1 home win over Derby. It was the second time in a few days the side had won by that score, Dave Martin (2) also contributing generously to this particular spree.

On December 25, 1951, Bill Baxter netted his only first-team goal for the club as they drew 3-3 at Aston Villa. Les Smith, later to join Villa, and Dennis Wilshaw scored the visitors’ other goals. Baxter was also subsequently transferred to Villa, in his case in 1953 after spending eight years at Molineux.

* We are happy to acknowledge John Hendley’s 2009 book, Wolves On This Day, as the source of the above historical information.