Oh To Turn Back The Clock! 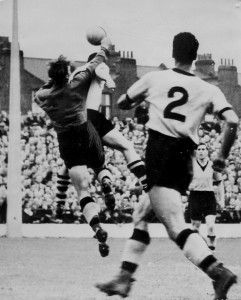 Eddie Stuart in action at Luton, this time in 1956-57 as Bert Williams punches clear.

Wolves’ FA Cup tie at Luton this afternoon had already stirred up some nostalgic musings – then along came BBC Midlands Today with their excellent preview last night.

As if there hadn’t been enough reminiscing, what with this being the first clash of the clubs in the competition since Wolves won 4-1 at Kenilworth Road in the fifth round on their way to winning at Wembley in 1959-60, the Beeb topped the lot by delving into their archives.

They came up with some footage of the meeting 53 years ago – where was that hiding when we were compiling the Official History of Wolves dvd a few years ago? – and wove it into a  package that also contained an interview with Kevin Foley (a Luton boy and part of the club from the age of nine to 22) and some gentle mickey-taking of Hatters-supporting presenter Nick Owen.

Wolves ran out 4-1 winners on February 20, 1960, but contributor Don Noble pointed out to readers of this site four years ago that Stan Cullis’s team had their work cut out to deal with the 1959 beaten finalists, who at the time were heading for relegation from the top flight.

Eventually, though, the reigning League champions pulled away to win by a distance in the clinging mud with goals by Bobby Mason (2), Eddie Clamp and Jimmy Murray.

My eye was caught last night by the sight of skipper Eddie Stuart, clad in short sleeves and tighter-than-most shorts, doing the coin-tossing duties before kick-off.

Eddie broke down on camera with the producers of the history dvd when talking about the Munich Air Crash but has also been very emotional in the past while speaking about how he lost his place in Wolves’ side in the last third of 1959-60 and missed out on playing at Wembley.

“As a South African, I would have been so proud to have led Wolves out in an FA Cup final – and to victory,” he told me many years ago. “It is still difficult to accept that I didn’t play in what would probably have been the biggest match of my life.”

Sympathy is also still plentiful among team-mates for Mason, who played no fewer than 50 first-team matches that season yet heart-breakingly missed out on a final spot when Cullis, his mind made up by the pre-Wembley 5-1 slaughter of Chelsea at Stamford Bridge, plumped instead for young Barry Stobart. 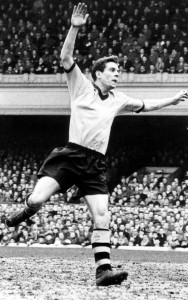 Bobby Mason, the two-goal hero at Kenilworth Road 53 years ago who heartbreakingly missed out at Wembley.

There is one other strange quirk to how the fixtures fell 53 seasons ago.

On the day Wolves were beating Luton and continuing a Cup journey that had already taken them past Newcastle and Charlton, they should have been playing the Bedfordshire side at Molineux in the League.

In the event, that latter game was moved back three days later to Tuesday, February 23, when the Cup quarter-finalists again emerged victorious, this time by 3-2 thanks to goals by Murray, Peter Broadbent and Stuart’s fellow South African Des Horne.