A Night Out At Walsall For Knowles And Co

Footballers went to watch matches at other clubs a lot more in days gone by. There was next to no live coverage of games for a start, so you either went along in person or missed out altogether.

Les Wilson recently told us how Albion’s Tony Brown had picked him up outside Molineux one afternoon in the late 1960s, so the two Mancunians and boyhood United fans could travel together for a big European Cup match at Old Trafford.

We can now illustrate, though, how this general love of dropping in on other teams’ fixtures sometimes extended well beyond individuals to entire squads.

As can be seen on the headline to the accompanying article (right) from the Evening Mail, an England under-23 group containing Peter Knowles were taken to watch the reserve fixture between Walsall and Arsenal at Fellows Park the night before they faced their Dutch counterparts at Birmingham in November, 1968.

And Wolves – still just under the control of Ronnie Allen before his dismissal and subsequent replacement by Bill McGarry – were reported to have been one of the clubs taking their ‘complete playing staff’ to the international clash in support of their hugely gifted inside-forward.

Our apologies for the poor reproduction of the picture on top of the Mail story but it shows Knowles adopting a typically informal pose, namely leaning on a corner flag, as he and Burnley’s Ralph Coates are addressed by Sir Alf Ramsey in a training session at the Metropolitan Cammell ground in Washwood Heath. Coincidentally, the two players were due to face each other in a First Division game at Turf Moor a few days later.

Another attraction to West Midlands eyes at St Andrew’s was the debut at that level of Alun Evans, who had not long left Wolves for Anfield as the country’s first £100,000 teenage signing.

The forward had scored five times in nine games for Liverpool and stepped in because of an injury to West Ham winger John Sissons. But he did not impress despite helping set up England’s second goal for Everton’s John Hurst.

But the side as a whole were disappointing in a 2-2 draw on a night on which they had been expected to win comfortably. 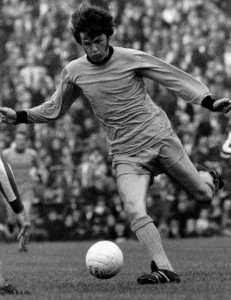 Peter in action for Wolves.

There was consolation at Molineux, though, as Express & Star man Eddie Griffiths reported: “Knowles delighted with some superb ball control and slide-rule passes.’

Given that the likes of Coates, McFarland and in particular Shilton went on to have careers with England at senior level, it’s not fanciful to assume the Wolves favourite would have followed them into the main team; probably in time for England’s World Cup defence in Mexico in 1970.

All of which is further fuel to the ‘what might have been’ feelings that Wolves followers have harboured for more than 40 years…..