Festive Rush With A Trans-Atlantic Angle 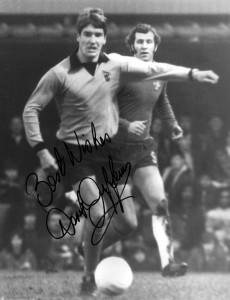 A signed photo of Derek Jefferson, who is being pursued here at Molineux by Peter Osgood.

This item is back a few days ahead of schedule – but only because a lot has happened and there have been plenty of entries to squeeze in. From Vancouver to Old Trafford to Molineux and Marks and Sparks, it was a busy (near) month.

Wednesday, December 19: Wolves’ forthcoming home game against Ipswich gives us plenty of options for the subject of the nostalgia interview in the match programme and editor John Hendley plumped in the end for Derek Jefferson, who hadn’t featured at any length in his pages for many years. Derek is an interesting, passionate character who was a less than a big success at Molineux. Now I understand better why that was the case.

Thursday, December 20: Asked Karl Henry during a brief meeting at the training ground if I’d be seeing him in the queue for turkeys at Marks & Spencer on Monday. We stood next to each other when the festive fare was being handed out last Christmas Eve, when he was delighted to have the following day off due to the putting-back of the game at Arsenal to the 27th. We were surprised to learn from Stale Solbakken at yesterday’s press conference that the players are being given the big day off this time as well despite the Boxing Day clash with Peterborough. Karl said he was using a local butcher to feed the household this time.

Monday, December 24: A late dash around the city shops brought me face-to-face not only with two members of the Wolves media department in what most of us still refer to as Beatties but also with Fred Kemp, accompanied by his wife and a grandson. As if those brief meetings weren’t enough, I moved on to M & S and was soon engaged in conversation with Peter Knowles. I took the trouble to check I didn’t need to wish him a Happy Christmas. I didn’t…..

Sunday, December 30: Had a long Skype conversation with Les Wilson, along with our wives. Vancouver at Christmas must be enchanting! But Les, God bless him, is thinking nostalgically of Wolverhampton. The publicity about the magnificent new Molineux museum (if you haven’t been yet, book your trip as soon as possible) has got him pining for a return to the city and club he fell in love with almost half a century ago.

Tuesday, January 1: Seemed strange seeing Matt Murray in the press room at the Albion v Fulham game while Wolves were preparing to face Crystal Palace – at the ground at which he made his debut in 2002-03 in a League game away to Wimbledon. Don Goodman was reportedly upstairs on the TV gantry at The Hawthorns and Paul Jones (the midfielder) was among we writers as well.

Saturday, January 5: True to form, Mick McCarthy made a point of shaking the hands of all the familiar faces from the Midlands press corps when he breezed through the ‘mixed zone’ while we were awaiting player interviews following Aston Villa’s FA Cup victory over his Ipswich side this afternoon. Talk about Wolves’ defeat at Luton was rife among us and one of our number couldn’t resist the temptation to shout down the corridor: “Mick, sounds like Wolves might be asking you back after the weekend!” To which his reply was suitably blunt. “I don’t think they’re as desperate as all that yet.”

Tuesday, January 8: With a nod to the managerial appointment Wolves have just made, interviewed Steve Froggatt for the Blackburn programme and couldn’t help but be enthused by his fond recollections of Dean Saunders from their Aston Villa days together. He convinced me how much the Molineux strike force will love having such a prolific marksman to guide them and we agreed that the players will be playing with a smile on their faces after the reported dressing-room difficulties of recent months. 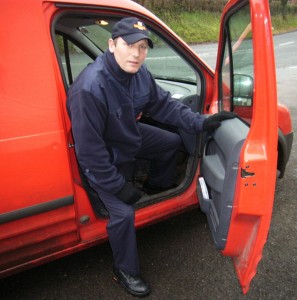 Wednesday, January 9: Having gone around seven years without visiting Old Trafford, I made my second trip there in ten days this morning, courtesy of having to go back to retrieve the lap-top lead I cleverly left in the press box at the Albion game just after Christmas. I gave the Sir Alex statue a miss but made a point of looking again at the one of Sir Matt and also the tribute to the three giants of the 1960s, Denis, Bobby and George. I had taken my copy of Denis Law’s autobiography to the recent game in the vain hope I would see him and get him to sign it.

Friday, January 11: A quartet of former Wolves men were this time on duty at the Wolves v Blackburn game – the aforementioned Goodman, Jones and Murray, plus, by way of a bonus, Andy Thompson, who is now performing some of the radio duties Robbie Dennison previously carried out. Deano’s well-received entrance, plus the ending of the club’s four-match losing run, made it a decent night.