Wembley Foe May Have Become A Wolves Star

Molineux Eyes Were On Midfield Ace

Colin Bell is a Manchester City legend who also won 48 caps for England. What is less well known is that he might have become a Wolverhampton Wanderers player, as Charlie Bamforth explains…… 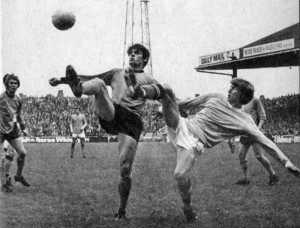 Almost a quarter of a century ago, I had the great good fortune to visit a lovely couple in Hoylake, Mr and Mrs Joe Mercer.

I had heard one or two things from former Aston Villa players who could take Joe – but mostly leave him – and was always surprised at that because surely we all remember the super genial persona that exuded from the man whenever he was on television.

And that was all I could see that evening back in 1989 from a person all too obviously and tragically stricken with Alzheimer’s. It was Nora who lovingly led her adored husband through his failing memory bank and a football career that had started with a schoolboy playing career alongside Stan Cullis in their native Ellesmere Port.

Happily, my perception has been reinforced by reading Reluctant Hero by Colin Bell (Mainstream Publishing). The book, which appeared first in 2005, leaves no doubt that the behind-the-scenes Joe Mercer at Maine Road was one and the same with what we had expected of the man. Perhaps the years of managerial strain had mellowed him. Who knows?

I do suspect, though, that Colin Bell would find it hard to be hyper-critical of anyone. He is clearly a very private, introspective, humble and modest individual, who tells in a very touching way of a difficult but loving childhood.

But my, couldn’t he play! And here is another that just might have made it to Molineux, rather than be a thorn in our sides so often and, of course, emerge as the scorer of City’s consolation goal in the League Cup final of 1974.

In fact, it was a true Wolves legend that was first to overlook the promise that abounded in the County Durham lad.  Bell and his dad went down to Arsenal and the youngster took part in trials.

“There were hundreds of lads at those trials, with seven or eight games taking place simultaneously….Billy Wright got up and spoke… Just to see him standing there in front of us filled us with awe.”

Alas, the ex-Wolves skipper, who did not prove the managerial success that a player of such excellence might have become, wrote to Colin:

“…although in our opinion you did not come up to our requirements, this does not mean  there may not be a place for you in professional football with another club whose standards are not quite as high….”

Undaunted, Bell and father went to Huddersfield, but it was the third club that they had agreed to see that did things very differently. Bury’s idea of a trial was to field the 17-year-old in two Central League games. The first was against Wolves.

“In goal for Wolves was Malcolm Finlayson and their regular centre half, England international Bill Slater, was also in the side.” 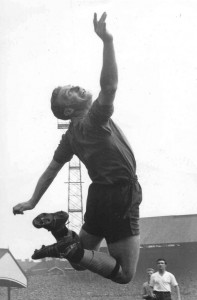 Bell did well in that game and in the one against Everton (who included Billy Bingham). Bury were sold on Bell and urged him to sign but he insisted on thinking things over for a week. Bell takes up the story:

“Wolves made a late attempt to persuade me to sign for them. They’d been impressed by the way I had played for Bury against their reserve side. One of their scouts came to our house after first losing his way and turning up in Cold Hesleden, which is further up the coast near Sunderland (rather than in Hesleden).  It was a snowy, freezing night and my sister Eileen says their scout brought a letter with him from the Wolves manager, Stan Cullis. It apparently said they must sign me urgently.”