McAlle Next Up For Popular Feature

John Richards has chosen one of the unsung long-time heroes of the Wolves side he knew and loved as the next subject of his Q & A feature on this site.

John McAlle has kindly agreed to step in as our first interviewee of 2013 and will be required to come up with some answers over the next few weeks.

The two men share more than the small matter of a few hundred appearances together in Wolves’ line-up.

They are also both from the Merseyside area, although JR’s roots a few miles along the East Lancs Road meant there was only one candidate for the nickname ‘Scouse.’

“I have such a lot of time for John,” said Wolves Heroes’ co-owner. “He wasn’t one of the players who grabbed a lot of headlines but he was always someone we all knew we could depend on.

“You can see from the number of matches he played for the club – at a time when we achieved a fair amount of success – what a good player he was. His partnership at the back with Frank Munro is legendary really.

“Thankfully, he has continued to live round here, so we all still see quite a bit of him. But it will be interesting to sit down and put some thought-out questions to him because that’s not often something we do when we get together socially.”

As ever, we are seeking questions from our readers, so please submit them to us directly here at info@wolvesheroes.com or use our friends in cyberspace by going via Molineux Mix.

Please ensure any questions reach one or the other of us by teatime on February 7. 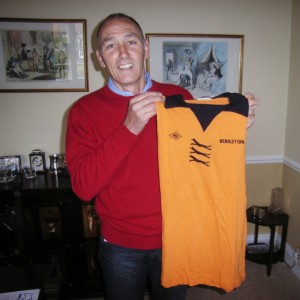 John McAlle in recent years with a prized possession.

McAlle is due to be at tonight’s Hall of Fame dinner at Molineux, when another of his long-time Wolves team-mates, Dave Wagstaffe, is due to be inducted.

The defender played an astonishing 508 League and cup matches for the club – a figure that has been bettered by only five men in Wolves’ all-time history.

The 62-year-old played brilliantly in the side who beat Manchester City in the 1974 League Cup final, only to suffer injury heartbreak when missing the Wembley showdown with Nottingham Forest six years later.