Our Tribute To The Hall Of Famers 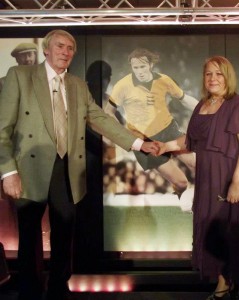 Dave Wagstaffe and partner Val at Molineux on Thursday.

Dave Wagstaffe has been congratulated by two of his former Wolves team-mates via Facebook after his induction into the club’s Hall of Fame on Thursday night.

Bobby Gould expressed his delight at the news in a message he signed off ‘Luv Gouldy’ and we at Wolves Heroes were only too happy to pass on the heartfelt sentiments of Les Wilson in Vancouver.

Frank Munro’s son Grant was among dozens of others to have used social media to make the same feelings known after Waggy, Major Frank Buckley, Malcolm Finlayson, Andy Mutch and the 1954 side who beat Honved at Molineux were all honoured at a sell-out dinner in the Hayward Suite.

A host of other Wanderers favourites were present to pay tribute to this fourth batch of inductees, among them John McAlle, Phil Parkes, Andy Thompson, Steve Bull, Robbie Dennison, Matt Murray, Eddie Stuart, Ron Flowers and Steve Daley. Derek Parkin had to cry off because of flu.

In his imitable way, Waggy, whose tendency to disappear pre-match and at half-time for a quick Park Drive in the toilets was discussed on stage by Parkes and McAlle, also spoke of when he took over in goal after Lofty was sent off in the 3-3 home draw against Albion in 1967.

“I was the last man Phil came to before he reached the tunnel, so he handed his jersey to me.” the winger said.

“I had never played in goal. I only touched the ball once because fortunately it was right at the end of the game. I just booted it as high as I could and the referee blew the final whistle.”

Wagstaffe, the 15th highest appearance maker in Molineux history with more than 400 Wolves games to his name, even received Royal approval during the evening.

Thanks to some friendly prompting, a letter had been sent by the Lady In Waiting at Buckingham Palace, congratulating the long-time hero on his accolade and even thanking him for taking several holidays on The Queen’s estate at Balmoral. We on this site wrote 18 months ago about how he saw the monarch on one of his visits to Scotland. 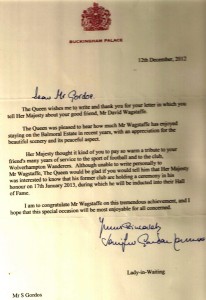 Stuart. meanwhile, travelled to the West Midlands from his home in Wrexham, where he was saddened by the recent death of his good friend George Showell, and was interviewed along with Flowers by MC Bob Hall as representatives of  the side who beat Honved.

“We were looked upon as the greatest club side in the world,” the defender said. “It was a wonderful night.”

Thankfully, six of the team are still alive. Bert Williams, Bill Slater, Peter Broadbent and Roy Swinbourne are the others, with Williams turning 93 in a few days’ time.

Continuing a goalkeeper theme, former Express & Star sports editor Steve Gordos, who, with his wife Lindsay, had orchestrated the letter from the Palace, told the audience about the time the ‘brave as a lion’ Finlayson struggled to find a way back into Fellows Park after going for hospital treatment during a Walsall v Millwall game. The Scot had to struggle through the crowd to get to the pitch, where he briefly went to the wrong end!

He revealed to the audience that he might never have joined Wolves. He was seen for a while as a possible successor to Sam Bartram at Charlton and spoke of how the legendary John Arlott, better known of course as a cricket writer and commentator, once thrilled him by saying he played ‘like a second Frank Swift.’

The tribute to Major Buckley, who is the third manager inducted, was led by historian Patrick Quirke, who wrote his biography.

He described him as a visionary who had foreseen all-seater grounds and even restaurant facilities at them, and reminded us that the late war veteran had brought Stan Cullis, Jimmy Mullen and Billy Wright to Wolves as well as discovering John Charles at Leeds.

Earlier, the gathering had broken out into loud applause in support of Billy at being reminded of the bizarre snub from the FA in a mosaic to celebrate icons from the association’s first 150 years.

And the first man to win 100 caps for any country would have been delighted at the honouring at Molineux of one of the players he watched regularly during his four years on the Wolves board in the early 1990s. 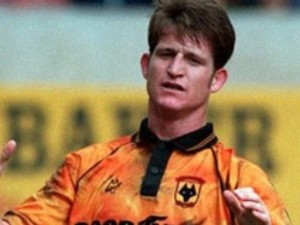 Andy Mutch’s first pay cheque bounced after he was recruited from Southport by Sammy Chapman but thankfully he hung around to become one of only 15 forwards ever to score more than hundred goals for the club.

“It was in a poor state then,” he said. “We were waifs and strays really. But the fans came back in their thousands and without them, there’s no club. I feel absolutely honoured to be recognised like this.”

Please may we also draw your attention to the fact that the inductions have been fully written about on Wolves’ official website and that the Hall of Fame now takes pride of place in the stunning new museum in the Stan Cullis Stand.