Wanted By Arsenal, Unused By Wolves

A League Chance For Terry – But After Molineux 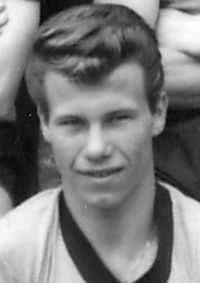 Terry Thompson at Molineux in the early 1960s.

A night out among London’s bright lights was about as close as Terry Thompson went towards hitting the big time with Wolverhampton Wanderers.

Despite a promising Central League debut against Manchester United and captaincy experience with the club’s A team, the four years he spent at Molineux as a teenager failed to bring him so much as a single first-team appearance.

All of which guarantees the trip that he had with the senior side in the autumn of 1964 a special place in his memory.

“There were no substitutes then, so a young player occasionally had the chance to go to an away game, especially if it was midweek and there was no match round here for us,” he said.

“I suppose he would be seen as a non-playing reserve but he was there to help with the kit and just get a bit of experience of being around the star players.

“My turn came at West Ham just before Stan Cullis left. I think he was actually off at the time because Joe Gardiner and Bill Shorthouse took the team at Upton Park and we lost five or six.

“But it was still a heck of an experience for me. I remember John Ireland organising for us to go to the Talk of the Town afterwards and some beers being left on the tables for the lads – and some tomato juice for me. I was probably 17 then and so dedicated that I didn’t drink.”

Thompson was born near Leicester on Christmas Day in 1946 and would have to settle for his years at a Fourth Division Notts County in the late 1960s by way of a Football League opportunity.

But there was clearly a time during his infancy in the village of Barlestone when he was viewed as a success story in the making.

“I was spotted over here by a Wolves scout called Doug Burbanks while I was in the county schoolboys side,” he added. “I played for that team three years ahead of my age and captained them in the end.

“One January Sunday, when I was 15, they invited me over to Molineux with my mum and dad and we were treated like lords. They laid a taxi on for us from Barlestone and back and showed us round the ground.

“I think we were greeted by George Noakes, although I obviously met Stan Cullis several times after that, and they wanted to sign me even without giving me trials.

“I had trained with Leicester’s young players up to then and always hoped to join them as they were my local club. But Wolves made a big impression on me.

“So much so that, even when an Arsenal scout was in our house until midnight trying to persuade me to change my mind and go there instead, I stuck with my decision to go to Molineux.

“I had agreed to stay on an extra term at school but the headmaster allowed me to leave at half-term because he knew I wanted to be a footballer.

“My first Wolves match was in the Wolverhampton Amateur League on the Saturday, then I went straight into the fourth team in the Worcestershire Combination and the A team in the Midland Intermediate League for a long while soon after that.”

Reserve team opportunities came also, the first when he was 16 and his dad and a group of friends travelled to Molineux to watch him face United.

Terry, a wing-half who played that day in the old no 4 role, regrets not having the programme from the game close to hand – “it’s buried away somewhere here” – as he believes Denis Law was in the opposition line-up.

He was on the very fringes when a Wolves side who were generally a year older than him reached the final of the 1962 FA Youth Cup. He was at both legs of the final against Newcastle without being involved but then skippered the club on a much shorter journey in the competition 12 months later.

“I played quite a few games in the Central League and have to say how impressed I was with Stan. He was at every game he could possibly get to at Castlecroft and would always say to your face ‘well played, son’ or ‘I thought you had a stinker.’

“I remember Jack Screen and Dave Lapworth being in charge of the more junior teams and seeing Alun Evans arrive at the club for the first time. He was not as good as Peter Knowles but still a hell of a player.

“It became obvious he was on a lot more money because his dad turned up in a brand new car. I think Alun thought his talent alone could get him through and I used to give him a few rollickings! I was quite vocal as a skipper.

“I tried very hard to make it at Wolves. I was so dedicated. But I just lacked a yard of pace, although I used to go back in the afternoons for sprinting practice with John Farrington. He was the fastest thing on two legs.

“He’s one of the few Wolves players I saw again after leaving because he lives this way and was involved for a while with the club at Barlestone. Ronnie Allen went there to open a new clubhouse when he was Wolves manager and I think Wolves provided them with a strip or two as a result of me going to Molineux.”

Thompson departed early in England’s World Cup winning year but had clearly made a good impression. He was subsequently signed for Notts County by Andy Beattie, the man who succeeded Cullis at Molineux.

The first of his 71 appearances for the Magpies, with whom he became a team-mate of Dave Watson and future Wolves coach Frank Upton, was in a 0-0 draw at Aldershot that March. The first of his three goals for them came in a win at Wrexham a month later.

Vic Povey, another member of the ‘Class of 62,’ had been at Meadow Lane before the arrival of a former Molineux colleague who would stay in the League until going part-time with Ilkeston Town.

During his three or four years there, he played for former Notts and Leicester man Dave Agnew and helped them win the Midland League. Thereafter, he wound down with Loughborough United and Long Eaton United.

By this time, the need for employment outside the game had kicked in and he began a long association with the motor trade,  initially as a pre-delivery inspector at a Ford main dealership in Loughborough, from where he progressed to stores and reception work, then to tyre repair services elsewhere. 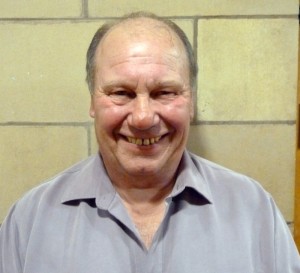 He was laid off four years ago, though, from what he terms ‘a good job’ and, in addition to his wife’s diagnosis with breast cancer (she is now happily all clear), they tragically lost a granddaughter who had been suffering from cerebal palsy.

He now has a 3pm-11pm packing job at Desford, five days a week, and has also found time in recent weeks to indulge his childhood passion by going to Leicester’s post-Christmas home games against Burton Albion and Huddersfield.