So Good They’re Doing It Again 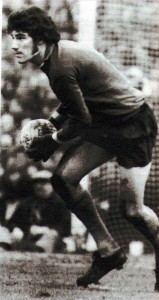 Phil Parkes is already looking forward to this year’s staging of the Ex Wolves Charity Golf Day after a highly successful revival of the event last autumn.

The long-time former Molineux keeper is one of the many keen golfers in the gold and black ranks and has a special reason for being proud at the outcome from when Oxley Park played the role of hosts in early November.

Having lost his wife Maureen to breast cancer nearly three years ago, he was delighted when a sizeable portion of the proceeds from the competition in early November was handed over via a fund in her name towards fighting the disease.

The West Midlands Air Ambulance and Compton Hospice were other beneficiaries the day, which attracted more than 20 former Wolves players despite having been rained off at short notice on its scheduled date in September.

“I was always keen to play a part in raising some money in Maureen’s name and we were all thrilled with what we raised for the various charities,” Parkes said.

“Money we have raised has gone to various pieces of equipment at the hospital and will continue to do so.

“Everyone present agreed that the golf day was brilliant and that we should repeat it this year. In fact, there is a wish that it might become an annual event, which is an exciting thought.”

Thanks in no small measure to main sponsors Chaucer, almost £8,320 was raised by the sell-out turn-out at Oxley – the course many 1970s Wolves players regarded as the top meeting point for after training and at which Geoff Palmer has been busily fulfilling his duties as captain. 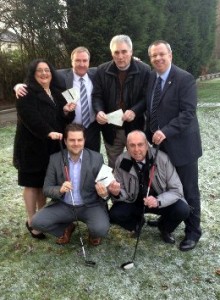 A time for thanks and celebration.

Also in attendance was Steve Saul, from Route 39, the local company who specialise in organising sporting dinners and auctions.