A Stay With Old Pal, Then A Family Call 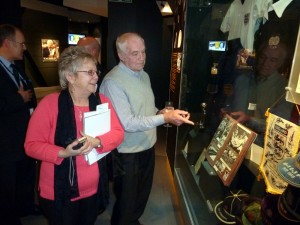 Sue and Terry Wharton at the opening of the Wolves Museum in November.

Terry Wharton is in the mood for more reminiscences this weekend after a visit back to his roots to catch up with his best pal.

The popular former Wolves winger has been with wife Sue in Bolton over the last two days to spend time with Dennis Crompton, the fellow pro whose own career in the game took a path away from his.

The duo were groundstaff colleagues at Notts County in 1958 before the sacking of Tommy Lawton led them to Molineux and Turf Moor respectively.

“Dennis virtually lived at ours from the age of 11 until 15 and we’re the best of mates,” he said.

“He was best man at my first wedding and came down here a few years ago when Sue and me were married. We were in Spain with him a couple of years ago and are going back to his place over there in March.

“Tommy Lawton was from Bolton as well and used to play schoolboy football for Lancashire with my dad, who recommended the two of us to Tommy at Notts County.

“Tony Hateley and Jeff Astle were there as well but Tommy was sacked soon afterwards, and I was sent to Wolves and Dennis to Burnley.

“He was a good centre-half or wing-half but was unlucky to go there when they had that outstanding team who just beat Wolves to the League title in 1960. He couldn’t get in the side but went on to play at Doncaster and then did well in non-League with Altrincham, Wigan, Rossendale and Horwich RMI.”

Wharton and Crompton had been Bolton Schoolboys team-mates at under-13 and under-15 level, with the latter making it into Notts’ reserves at the age of 16.

Terry made a solitary appearance in the side – in a 7-0 defeat at Norwich – and the two stayed in close contact until he departed for several years in South African football.

They picked up the threads after his return from Durban and their latest reunion this week also included an appearance by the winger’s cousin Julia. Which brings us to a family reconnection thanks to Wolves Heroes…….

We were contacted out of the blue recently by Sydney-based Jeff Moran, who had read various articles about his family member on this site and turned out to be Julia’s brother. The two are due to be in contact this weekend.

“We haven’t seen each other or had any contact since the 1970s,” Jeff emailed. “I have lived in Australia since 1983 and haven’t returned to England. It would be great to hear from him.

“My first football memory of him is of his debut for Wolves against Ipswich in, I think, 1961. If I remember right, Ipswich had gained promotion from Division Two the previous season and Alf Ramsey was manager and the prolific Ray Crawford was centre-forward. 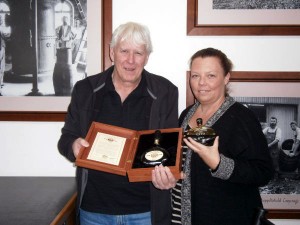 Jeff Moran and his wife Linda at home near Sydney - with a bottle of vintage port they plan to open when they become grandparents for the first time!

“Courtesy of Terry, his mum and dad, my dad and I, plus a couple of uncles, had tickets in the Molineux Road Stand. Terry was the right winger and Alan (Noddy) Hinton was on the left wing. But they were encouraged by Stan Cullis to swap wings.

“It was some time in the second half that someone (I think it might have been Noddy) fired in a shot that was blocked by the keeper. The ball flew into the air towards Terry, who was on the left side of the six-yard box, and  he looped a header over the keeper into the far corner of the net. He was my hero at that time.”