Much For Gold And Black Eyes To Feast On

Something For Us All In Backpass 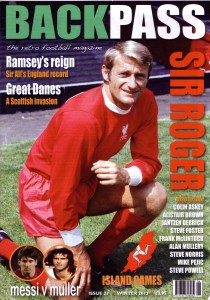 Something to look for on the shelves - from around Thursday this week.

Wolves fans have the usual wide variety of offerings to tempt them in the latest issue of the outstanding nostalgia magazine Backpass.

Some contributors believe this to be the best of the 27 editions published to date, with features on Roger Hunt, Alan Mullery and Sir Alf Ramsey among the heavyweight items in the 64 glossy pages.

Although the only dedicated Wolves piece is a sad one – a tribute to George Showell by top obituary writer Ivan Ponting – Molineux-related mentions are frequent elsewhere.

Alun Evans’ role in ending the Anfield impact of England World Cup winner Hunt is discussed, so, in a long Frank McLintock interview, are some of Billy Wright’s dealings as Arsenal manager.

Ray Crawford’s name crops up in two articles, one of them a humorous one that contains a photo, and there’s an interesting follow-up to the John Richards q and a that we penned last time round. JR might shudder at an astonishing anecdote by Mike Pejic that also features Steve Kindon but he will enjoy seeing a photo of Micky Spellman, the north-east lad with whom he signed at Molineux in the late 1960s.

John Galley and one-time Wolves youngster Ken Wimshurst are both seen in Bristol City colours and Graham Turner, Mike Bailey, Jimmy Melia and Crawford again are all referred to in a piece with ex-Brighton centre-half Steve Foster.

There are articles on Duncan Edwards (by the Express & Star’s early 1980s Wolves correspondent David Harrison) and the recent Hall of Fame dinner at Molineux, plus a spotlight on the Burnley team who pipped Stan Cullis’s Wanderers to the League crown in 1960 and so became the smallest club to ever win the title. 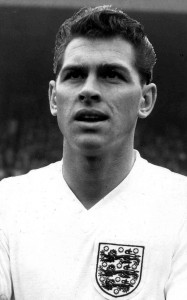 Ray Crawford pictured while winning one of his two England caps - both before he arrived at Stan Cullis's Wolves.

Although we have more than a passing interest in Backpass, we have no hesitation in recommending it very highly to our readers.

For those who have been quite late in latching on, there is a ‘back orders’ facility that covers most of the issues since the magazine’s launch five and a half years ago.

Details of how to purchase are available by clicking on the appropriate icon on the right side of this page or by emailing Backpassmail@aol.com – and learning about the special offer in place for issues 27, 28 and 29.