When It Was All About Long Service……

A Traditional Reward For Loyalty

On November 28, we presented a detailed outlook of seven testimonial matches that Molineux has hosted over the decades.

Here, we continue our look at the subject by spotlighting a further four of this dying breed of games. And we still have another group to profile in the coming weeks.

So how many more of these fixtures will be played? Players don’t hang around long enough these days to be honoured in this way and they earn such fortunes anyway as to make the whole concept a thing of the past.

Now on with the memories…… 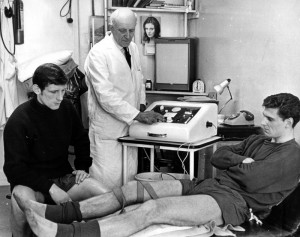 Bobby Thomson, seen here with Dave Woodfield while receiving treatment in his Wolves careeer, was back at Molineux for Phil Parkes's testimonial.

The fact that Bobby Charlton was several years into his retirement didn’t stop him from turning the clock back and emerging as the star attraction on Lofty’s big night.

Sadly, there were only 3,116 present – a possible reflection on the time of year and the fact Wolves were having it tough on the pitch as they battled for their First Division lives – as the Manchester United and England legend scored twice in his side’s huge victory.

Charlton smacked one effort against the post, then netted with a close-range shot that was deflected in by John McAlle. That made it 2-0 after Steve Hunt’s opener and Charlton struck the third seven minutes into the second half before John Farley opened up a four-goal lead. George Berry sliced Ashley Grimes’ shot into his own net to complete the scoring.

An unfamiliar name on the team sheet was that of Peter Gray, a 23-year-old from the Bloxwich Combination who wrote to Wolves saying it was his lifelong ambition to play at Molineux.

Unbelievably, he was invited to play and, although he was eventually withdrawn and replaced by Steve Daley, he enjoyed more of the star treatment when pictured in the Express & Star along with Kenny Hibbitt and Willie Carr.

An unlikely long-range special from Bob Hazell was the highlight of this exciting Wolves victory from behind. And who the unlucky Spurs keeper? None other than Mark Kendall – a favourite at Molineux a decade later.

Sammy Chung’s side had beaten QPR and Arsenal in their previous two home games and added a third London scalp, in less pressured circumstances, despite falling in arrears to a Chris Jones goal in the first half.

Hazell took aim in the 70th minute to blast the equaliser from 25 yards and Mel Eves netted the winner five minutes later.

It was good entertainment for the 4,684 crowd, not least in the form of the midfield mastery of Ossie Ardiles, who overshadowed Ricky Villa and a third Argentine, Alberto Tarrantini, the Birmingham man who took a surprise place in Wolves’ line-up.

Like Kendall, Glenn Hoddle went on as a substitute on a night that had started with a Showbiz XI v ATV XI match which included the likes of Alan Hinton, Terry Wharton, Alan Durban, Robert Plant, Bev Bevan, Jeff Lynn, Ian Sludge Lees and Pat Foley.

Derek Dougan was back for a hugely popular Molineux encore and was brought down by Bobby McDonald for the first-half penalty that Kenny Hibbitt hammered home two days after hitting the only goal of a League derby at Stoke.

The Select XI, who were managed by Ron Atkinson, were already two up, though, through Tony Brown and Paul Maguire and pulled away in the second half via goals from Joe Gallagher and Dennis Mortimer. Their side also included the likes of Jimmy Rimmer, John Wile, Ian Wallace, David Mills and two Midlands stalwarts who eventually made their way to Molineux, Gordon Cowans and Cyrille Regis.

Wolves were on a high at the time after the signing of Andy Gray early that season and Parkin was honoured by a crowd of 7,261, who were also entertained by a match between Gary Newbon’s All Stars and a Beacon Radio XI.

Peter Knowles was on show once more in this pre-season Sunday offering and thrilled the 6,221 attendance with some characteristically lovely touches. 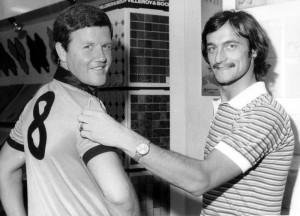 Not a bad 'draw' for your testimonial.....Kenny Hibbitt welcomes Peter Knowles.

Over a decade on from the bombshell of his retirement decision, Knowles turned out to support a man withwhom he had played only once in a competitive Wolves first-team fixture – a home derby against Albion in April, 1969, when the younger of these two sons of Yorkshire went on as a substitute for John Farrington.

Against Leicester, John Pender – starting his second season as an apprentice – headed one goal and began the move which brought the 77th minute winner for Andy Gray.

The occasion was billed as Molineux’s first taste of Sunday football and had started disappointingly for Wolves with Steve Powell firing Leicester ahead, only for Pender to produce a quick equaliser.