A Star Who Appeared……..For One Night Only 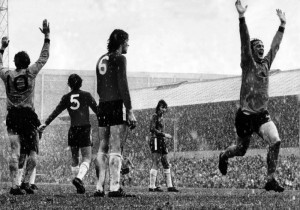 Alan Hudson (centre of photo) peers through the snow as Kenny Hibbitt celebrates scoring the only goal of Wolves' home game against Chelsea in February, 1971.

Graham Hawkins has already gone on record regarding the hit-list of players he drew up in the wake of Wolves’ utterly unexpected promotion triumph 30 years ago this spring.

But beyond the six names he and his staff put to the club’s board – Mick McCarthy, David Seaman, Micky Gynn, Paul Bracewell, Ashley Grimes and a certain Gary Lineker – one other star man briefly appeared on the Molineux radar that close season.

Alan Hudson effectively offered Wolves first refusal on him when he came home from a lengthy stint with Seattle Sounders to play in Geoff Palmer’s testimonial match against Leicester in May, 1983.

The midfielder was then 31 and tainted with a certain colourful reputation but was at pains to point out that he would be interested in a move to the West Midlands.

Having just arrived back in this country, Hudson was contacted by the Express & Star’s David Harrison, who was a member of Palmer’s testimonial committee, and said: “I’ve come back to England to have a good look at the scene.

“I would certainly be interested in a move to Wolves. I spent three of the best years of my life in the Midlands with Stoke and would love to come back here.

“Wolves are a big club with great tradition and have done remarkably well this season to get promoted. I have always enjoyed playing there.

“Apart from the effects of jet lag, I feel pretty fit and hope to have a good game on Monday.”

In his prime, the Londoner had won the European Cup Winners Cup with Chelsea and played in every game bar the final when they lifted the FA Cup in 1970.

Remarkably, considering he also served Arsenal, it was at Stoke that Hudson might well have got his hands on a League Championship winners’ medal. Tony Waddington’s side lost one and drew two of their last three games of the 1974-75 season to finish four points behind champions Derby in an unflattering final placing of fifth.

The Wolves link didn’t really catch light. He was one of several players to make guest appearances in the second half of Wolves’ 4-1 victory over Leicester on Palmer’s special night – Aston Villa duo Gary Shaw and Allan Evans and Stoke’s former Molineux full-back Derek Parkin were others – but there were no transfer talks. At least none involving Hawkins. 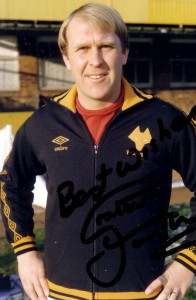 Graham Hawkins - had other targets in mind.

“There was a fairly definite list that we put to the board, so I can’t remember having any particular interest in Alan,” the manager said today. “And because of what we now know to have happened, I’m sure we would never have been able to afford him anyway.

“We weren’t able to sign any of the players we wanted and the only one who came in was Tony Towner. Derek Dougan did a lot of good work for Wolves and he and I always got on pretty well. But he did that deal while I was on holiday. Towner wasn’t on my list.”

Hudson subsequently rejoined Chelsea, although he didn’t play for them in his second stint at Stamford Bridge, and quickly moved on for a much more fulfilling spell back at Stoke.