Up One – Defender Who Started In Midfield

We already knew that John McAlle was one of the most experienced players in Wolves history. But it appears he’s a fraction closer than we thought to the club’s top five all-time appearance-makers.

Thanks to the diligence of keen statistician and author Steve Gordos, it would seem we can now credit the veteran defender with having played an extra game – one that had apparently slipped the attention of the record books.

It was only a six-minute appearance as a substitute – that is presumably is why it was overlooked – but it counts nonetheless.

“I have been researching some matches in the late 1960s,” Gordos said. “I was prompted by something Dave Wagstaffe had written about Bill McGarry virtually ignoring John as a central defender for a season.

“I set out to check how many starts he made in 1969-70 and whom he substituted for, and found out it was nearly always a midfielder he went on for, rather than a defender. Three of his five starts that season were in the no 8 shirt.

“That’s when I found in Phil Morgan’s old book of cuttings a bit about John getting on near the end of the Southampton away match in August, 1969, and discovered its absence in the Complete Record books.

“Phil’s report reads: ‘With six minutes to go, Dougan limped off the field to be replaced by John McAlle, who in his short stay, also had time for a near-thing shot.’ So there seems to be no doubt.”

McAlle had no recollection of his sub outing at The Dell when we rang him this afternoon but was interested to hear that he had almost scored in Wolves’ 3-2 win. He netted only three times for the club in League and domestic cup games.

“I don’t have a good memory for many individual games, although I remember us doing well at Southampton generally and playing a few times there early in the season when the pitch was hard,” he said.

“And, yes, Bill did use me mainly as a midfielder in my early days. It was only later I was seen by him as a central defender. 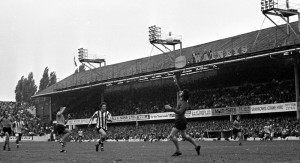 'Scouse' (far left) watches Frank Munro concede an own goal in Wolves' 1-1 draw at Southampton early in 1972-73. Please try clicking on photo to enlarge it.

“I’m obviously happy to learn I have another game on my record but please don’t find me too many more……Ron Flowers was much more worthy than me in standing in fifth place in the list. I wouldn’t want to go past him!”

We have amended the Legends area of our site accordingly.