To Wolves fans of a certain generation, Stuart Darfield is no more than a name out of the stats part of the programme. But Charlie Bamforth has tracked him down and persuaded him to share the story of his unfulfilled football career.

A photo of Stuart Darfield from a 1967 Wolves team group.

It is a brutal reality in football that so much depends on a chance encounter, a hasty decision and, above all, the unpredictable idiosyncrasies of whoever is in authority at the time. Great ambitions and genuine promise can so readily fall by the wayside.

The name of Stuart Darfield is not exactly etched in the roll of highest honour at Molineux but, with different handling from his coaches and with less of the resultant disenchantment on his own account, the Leeds-born midfielder might just have achieved more than a sporadic Central League record as the highlight of his stint as a Wanderer.

“I played for Foxwood School right through from my third to last year,” he said. “We were unbeaten. There were two other unbeaten teams in Liverpool and Coventry and we beat them both. Four of the lads went on to become professional footballers.

“I captained the Yorkshire Amateurs side and also played for Pudsey Juniors, the Leeds feeder club. But United tended to take lads from further afield for the most part, so I agreed to join the Wolves nursery club, Wath Wanderers, in 1965 when I was 15.

“There were lads coming and going the whole time – it was a different side every week. Paul Walker was my pal. The manager, Mark Crook, had a battered old Dormobile in Wolves colours. He was supposed to be using it to pick lads up and drop them off after the game but he liked to use it for his greyhounds. So he’d give ’em two-and-six and say ‘get yourself a bag of chips and go home on the bus’!”

Darfield, a midfielder, spent three-quarters of a season at Wath before heading off to Molineux on Crook’s recommendation to become an apprentice – and embark on the job of cleaning Ernie Hunt’s boots. His Wolves career almost finished before it had started.

“I first went into digs at with Mrs Sparrow. But in the first week I was caught coming in at 20 past one. I’d been out with Phil Parkes and several of the other lads. My mistake was to be the last one in the taxi, so I ended up paying the fare as well as being last home. Ronnie Allen said: ‘So, lad, you want to be off back up north, do you?’”

“I quickly moved next door to Mrs Screen. She and Jack (a former Wolves coach) were lovely, lovely people. Mike O’Grady and Kenny Hibbitt (after my time) stayed there, too. The Screens came up to Yorkshire to see Mum and Dad after I had left the club.

“I was 16 years old and 9st and playing in the B team in the Worcestershire Combination, then in the West Midlands League. It was a good standard – rough, mind. We had a great run in the Staffordshire Senior Cup. I scored the winner in the semi-final against Bilston. We played Tamworth in the final. Alan Murray scored in that game. He went on to be assistant manager at Newcastle.

“That day, Mrs Screen told me her Mam had had a dream and Foinavon was going to win the Grand National. I couldn’t believe it, so I put sixpence on Foinavon and 9/6 on Red Alligator!  Foinavon won at incredibly long odds.

“We were treated like serfs by the club. We were wearing all the cast-offs in training dished out by Jack ‘Chopper’ Dowen. We looked like something out of the 1940s.

“Gerry Summers was the coach – a miserable bloke. He would say: ‘Stop dribbling, get it down the field. It’s only Peter Knowles that dribbles at this club’. The other coach though, Ron Bradley, couldn’t have been more amiable.

“My mates were Terry Kingon and Robert Aldwinckle. I thought the world of Frank Munro. The Doog would take us along to his media interviews. I used to dig with the reverend, Les Wilson, in Penn.”

A highlight was playing in a friendly at Castlecroft against the England under-19 side.

“All the big wigs turned up in their blazers,” he recalls. “‘Chico’ Hamilton was in the England side, I remember. We had a trialist keeper. In he came and I swear he was 6ft 6 if he was an inch.

“He was carrying a bag of plumber’s tools and he dropped them on the floor as he got changed.  Anyway, we were down 4-2 at half time and he had ‘thrown in’ all of them. At the break, Ronnie Allen looks at him and says: ‘Son, is that your bag? Then look after it, ‘cos I think you’re going to need it.’ He was substituted. It finished 7-7.”

Stuart reached the second team in 1967-1968. “I had a stormer at Huddersfield. I travelled up with Frank Munro. He urged me to go in to see Allen and push to sign a full pro form. But I couldn’t be bothered. I had lost a lot of interest and wasn’t alone. 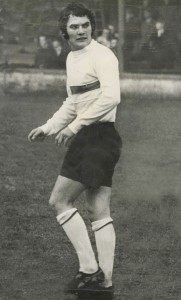 With Bradford Park Avenue in 1968.

“Bertie Lutton had a real go at Summers. Even his mother got involved. At the end of the season, Ron Bradley took me out on to the field. ‘We are letting you go’, he said. ‘We think that you are good enough for the Second Division but we have to focus on those we think will make it in the First Division.’

“So I came home to my parents’ pub in Guiseley. I heard that Coventry were interested but I didn’t pay much attention. Then there was a phone call from Mark Crook, who told me Bradford Park Avenue were interested.

“The manager, Jack Rowley, came to the pub and offered me £10 more than I would have got as a professional at Molineux. Like an idiot, I signed. I hadn’t even been to the ground. My dad said: ‘Great, you can use my car as it’s so near.’ But, on the first morning, he said I couldn’t, so I went on the bus. I was horrified by what I found. They were cutting the grass on the pitch with garden shears”

Darfield found himself playing alongside one former Wanderer, Glen Andrews, and a future legend, Kenny Hibbitt – ‘a nice lad.’

“I introduced Glen to the girl who was to become his wife. Mrs Screen’s daughter’s best friend wanted to meet him, so I arranged it. I went to the wedding.”

Darfield was let go at the end of that 1968-1969 season. “Arthur Lunn, the Bradford scout, left at the same time and was heading back home to Bangor in North Wales. He was going to manage Pwllheli and he wanted me to be his captain.

“First, though, Mark Crook had phoned telling me Grimsby wanted me, although they had some concerns that I had had a couple of fights with the management at Bradford.  I heard nothing, so I wrote to them. They told me they had had a change at the top, had appointed Bobby Kennedy from Manchester City and everything that had been agreed before was void.

“So I spent a season at Pwllheli on only a bit less money than I had been on at Bradford. I would head off really early on a Saturday and not get back until midnight. There were no motorways on that trip in those days. I wrote three cars off in the year. The car was full each week with players I was taking down from Yorkshire.

“Afterwards, I signed for Scarborough and did three weeks pre-season with Colin Appleton but then he said: ‘I have heard that you can get into a bit of bother.’ It seems Lunn had put a bad word in about me, probably because my leaving meant he had lost half a team in those that travelled with me.

“So my football petered away, I lost interest. I worked in quality control in a printing factory, then insurance and civil engineering. I have been retired for seven years.

“I later played football for fun, including for Yorkshire Television All Stars, such as the time at Elland Road against Radio 1 DJs. Jack Charlton started as ref and ended up playing. There was Les Cocker, Brian Close…. lovely days!” 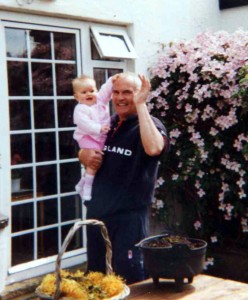 Nowadays, Darfield is, in his own words, chief cook and bottle washer at Rawdon Old Boys, a proud club of 103 years’ standing who ply their stuff in the Harrogate League. And he still keeps tabs on the professional game.

“In November, there was a feature on the television about Doncaster playing Bradford in the FA Cup,” he added.  “They did a flashback to when the clubs met when I was there – Alick Jeffery was in the Doncaster side.

“We won 2-1 and Glen Andrews scored the winner. So I am looking at this and I suddenly think: Hey, that’s me! I called my missus to come and watch and she shouted back: ‘Nay, I’m cleaning my teeth’!”