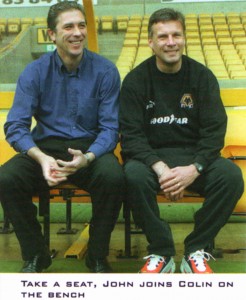 How the programme showed him moving in alongside Colin Lee.

Twelve years ago this winter, John Ward stepped into the role of caretaker Wolves manager and inspired the mid-season run that spelled the difference between survival with comfort and a nail-biting scramble for safety.

Take away the nine points the side accrued (via three victories and one defeat) in his four-game stint in charge and Wolves would have finished with 46. Huddersfield went down with 48.

Coupled with his already sound CV, it was a record that seemed likely to make Ward a worthy candidate for other jobs at this level at Barnsley and Norwich, especially as he showed enterprise in blooding or reintroducing youngsters like Adam Proudlock, Keith Andrews and Shane Tudor at Molineux.

Instead, after retreating back into the no 2 role when Colin Lee was replaced on a permanent basis by Dave Jones, and then assisting the club into the Premier League in 2003, he slipped down the divisons.

In a four-year stint as Cheltenham manager – with Keith Downing at his side – he inspired the small West Country club to promotion via the play-offs and got them consolidated in League One.

He then took Carlisle to the brink of the League One play-off final in 2007-08 before paying the penalty for a poor start to the following season and followed up with a stint of two and a half years in charge at Colchester, also in the third grade.

This winter, he has achieved early success after treading a familiar path……the one leading former Wolves personnel to Bristol Rovers.

Bobby Gould twice and Mark McGhee have previously been in the hot seat there, as has Ward himself – also an ex-manager at neighbours Bristol City. And look at the side’s progress in recent months.

Rovers were one place off the bottom just before Christmas when they tempted the 61-year-old to tear up the train ticket that was due to take him to Devon and into the job as Plymouth’s director of football.

Now, they are 15th, a comfortable nine points above the danger line, after an impressive record under him of eight victories, three draws and three defeats from 14 games. On Saturday, they recorded a 3-0 home win against promotion-chasing Burton Albion and beat Exeter tonight. 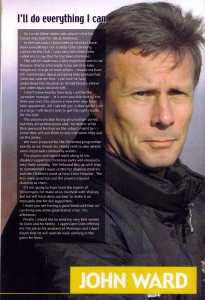 And how the match-day magazine was 'tweaked' when he became caretaker boss in December, 2000.

I was criticised by a senior figure at Wolves in the summer of 2001 when writing that Ward’s caretaker contribution might have spelled the difference between survival and relegation.

But his record before and since – he was a long-time assistant to Graham Taylor at Watford and Aston Villa well before pitching up in 1998 at the post-Taylor Molineux – underline that he’s a thoroughly solid performer.

What’s more, you’ll be hard pushed to find anyone who disagrees with the view that he’s an absolutely top bloke.