A Wolves Insight Into Youth Development 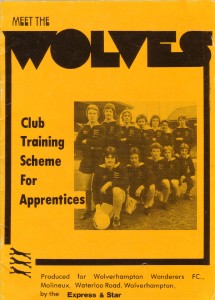 The printed insight into how Wolves did it.....

When Wolves underlined their supremacy over today’s opponents Nottingham Forest in the 1976-77 title-winning season at this level, they did so with a side more than 50 per cent made up of home-grown lads.

Geoff Palmer, Steve Daley, John McAlle, John Richards, Alan Sunderland and Martin Patching all joined the club straight from school and played in a 2-1 win on February 5 that completed the double against the East Midlanders.

Of the team who won 3-2 at next weekend’s Molineux visitors, Bristol City, on the first day of the following season, the number of Wolves products had risen to seven, with Phil Parkes returning in place of Gary Pierce to join Palmer, Daley, McAlle, Patching, Richards and Sunderland in Sammy Chung’s line-up. In addition, left-back Maurice Daly’s only previous service had been with Home Farm in his native Dublin.

Little wonder, then, that Wolves saw fit to promote the success they had in developing their own by coming up with a little-remembered publication in the late 1970s.

A 16-page booklet called ‘Meet The Wolves’ – kindly sent to us by our good friends at the retro football magazine Backpass – was produced in conjunction with the Express & Star and contained articles by chairman Harry Marshall and manager Chung, as well as profiles of three of the club’s successes in this field, namely Daley, McAlle and Patching.

It also displayed, inside its back cover, a photo of the youth squad – containing John Humphrey, Wayne Clarke, Mick Matthews and skipper Colin Brazier – who had won the 1977-78 Midland Intermediate League Cup and an international youth tournament in Switzerland.

But, as ever, some of the more interesting content came through a scratch beneath the surface.

The two centre pages look at the weekly training programme for apprentices at Molineux and revealed that 9-9.15am each day was set aside for jobs, to be followed by half an hour of ‘match discussion’ on Mondays and Fridays and ‘individual technique practice’ on the other three days. 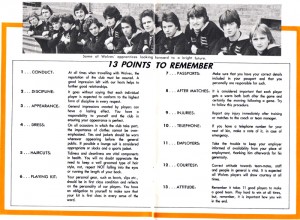 Some important dos and don'ts.

Although Bill McGarry had long since departed, the high standards he and Chung adhered to were spelled out in another double-page feature, which we have reproduced on the left here. Please click on the image to try to make it bigger and let us know if you struggle to do so.

In his opening address in the booklet, the manager said: “Here, at Wolves, we have always been proud of the progress made in the development of youth, which, over the years, has held us in high esteem and produced some of the finest players in football. We are convinced our youth set-up is second to none. Nothing is ever left to chance with the development of our lads.”

And Marshall added: “I believe the opportunity for youngsters to succeed at Wolves is unsurpassed by any other club in the country.”