Still Time To Join The Heroes Of 1980 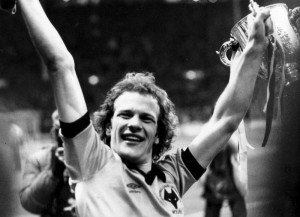 We plan to be present at Friday’s reunion of Wolves’ last team of League Cup winners – and hope plenty more of you will join us.

Interest in the night of nostalgia has been high but a chat with chief organiser Mel Eves today has confirmed that places are still available for those with Wembley reminiscences on their minds.

The charity dinner is being marketed as a first opportunity in 33 years to mingle with so many of the stars who pulled off that shock victory over Nottingham Forest – and brought the club what has proved to be their last major trophy.

“We’re delighted with the response, both from the people involved in that success and the supporters,” Eves told us today.

“More than 200 tickets have gone but the Copthorne Hotel in Brierley Hill has space for 300 guests, so there’s still room for others who want to come forward.

“We’re thrilled that so many members of the squad and the management are due to be present. One faces a late fitness test and Martin Patching has unfortunately cried off this morning but there will be a lot of fans’ favourites in attendance. It’s going to be a great night.

“The fact that it’s for a brilliant cause with local charities to benefit makes us even happier with how it has come together because it’s not easy getting supporters to put their hands in their pockets these days.”

From the side captained by the late Emlyn Hughes on what will be 33 years ago to the day, Paul Bradshaw, Geoff Palmer, Derek Parkin, George Berry, Kenny Hibbitt, Willie Carr, John Richards, Andy Gray, Eves and substitute Colin Brazier have all indicated they plan to be there.

John McAlle, who was ruled out of the final by a broken leg, heads a list of other attending squad members that is also due to include Wayne Clarke and Norman Bell.

Manager John Barnwell and his assistant Richie Barker have accepted invitations as well but Peter Daniel is a confirmed absentee.

“You just hope there are no late mishaps or travelling problems,” Mel added. “An event like this takes a lot of organising but it has been great fun for us putting it together.

“There will be footage of the game on screen and we have Paul Franks in to act as compere. He’ll be interviewing various players and then taking a back seat when we hear from the comedian, Josh Daniels.” 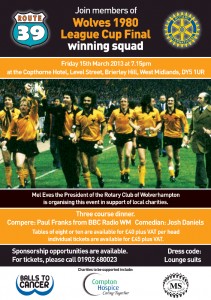 What it's all about.

Media interest in the event is high and tickets are available through calling Steve Saul of Route 39 on 01902-680023. He also has details of sponsorship packages.

The function, for which the dress code is lounge suits, starts at 7.15pm.