A Golden Night With The Silverware

The Wembley Heroes 33 Years On 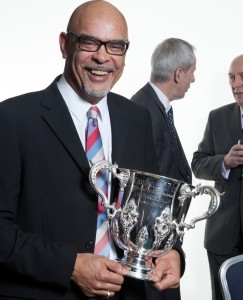 If the rain didn’t disturb Bristol City’s players at their Black Country hotel last night, maybe the homeward-bound Friday night revellers did. Or perhaps it was the spontaneous cheer that greeted the easiest goal of Andy Gray’s career that did the trick.

How ironic that the coming together of over 200 guests in recognition of the winning of the last major trophy in Wolves history coincided with the more sobering sight of red-tracksuited visiting players – and their Wolverhampton-born manager – preparing for a survival six-pointer at Molineux today.

Nostalgia, it is said, becomes all the more pertinent when the present is gloomy and, boy, we had the two extremes at the Copthorne in Brierley Hill!

“I still get goosebumps watching that,” said Kenny Hibbitt, as the final whistle blew on the full-match big-screen coverage of the unlikely 1-0 League Cup final victory over Nottingham Forest. I swear he and Gray, at his side on one of the front tables, looked nervous all over again as the seconds ticked away.

Gray’s Friday had begun with puzzlement over a tweet at talkSPORT asking him if he knew what he had been doing 33 years ago to the day. He didn’t have a clue, although a ticket in his pocket might have provided him with one…..

The Wembley match-winner was not quite on top form as he was reunited with good Molineux mates, a trip to Cheltenham Races having left him a little, erm….hoarse.

But he was in his element and on centre stage as a memorable evening unfolded with the introduction of ten former players, plus assistant manager Richie Barker, and the unleashing of a thousand memories.

“I can’t believe it all happened so long ago,” said Gray, who, when asked to sign a photograph of him celebrating one of the goals in the semi-final victory, realised that he had also forgotten it was Swindon, not Grimsby, who Wolves beat at the last-four stage. 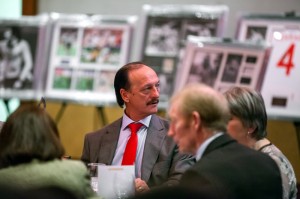 Kenny Hibbitt....glued to the big screen!

Hibby, the top marksman in the run with four goals, drove up from the West Country to attend despite the inconvenience of having to double back to Southampton on referee-assessor duty today and, of the locals, we welcomed John Richards, Willie Carr, Geoff Palmer, unused Wembley substitute Colin Brazier, Wayne Clarke and main organiser Mel Eves.

George Berry popped down from North Staffordshire while, from much further north, there was an appearance by Norman Bell, like Clarke a member of the squad .

“I used to be good pals with Norman and joined Jacksonville after he had played for them,” Brazier said. “But I bet we haven’t met for more than 30 years. I used to go up to Blackburn and stay with him occasionally after we left Wolves.”

Comment was passed more than once that the likes of Hibbitt, Carr, Richards, Eves and Clarke, in particular, didn’t seem to be carrying much more weight than when they delivered their heroics.

Others have inadvertently taken on new appearances, not least in hairstyle, among them Gray, Berry, Bell and Palmer. “You bald bastard!” boomed Berry as he greeted Palmer around 7pm and set about catching up on the last three decades.

By way of a bonus, Andy de Bont, Stewart Ross and Dale Rudge were introduced as they took their seats elsewhere among a gathering that included two tables full from London Wolves.

John Barnwell was ‘absolutely gutted’ that he was unable to make it after a recent fall that led to an ECG and doctor’s orders to avoid unnecessary exertion but he said in a read-out email: “It was a special period and one that should be celebrated. Please say hello to everyone, especially to Richie, without whom this wouldn’t have been achieved. Have a great reunion and thanks for all the special memories.” 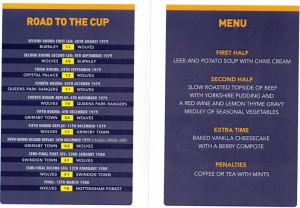 Cup (and culinary) delights. Please click on image to enlarge.

The match coverage included a lengthy half-time interview with Barnwell by a young Martin Tyler – started in the tunnel near the door to the dressing room and continued well along the touchline towards the dug-out; certainly well in excess of a Sir Alex Ferguson Champions League soundbite!

As more than one copy of the match programme (price 60p) was passed around for autographs, compere Paul Franks welcomed first Palmer, Brazier, Berry and Bell on to the stage.

Palmer, who joined Richards, Hibbitt and Derek Parkin in playing in both the club’s League Cup final triumphs, said he thought the robust tackling would ensure that the same fare today would result in matches ending in five-a-side. One challenge on JR by Viv Anderson, especially, had made him wince.

Further insight came from one of those confined to the sidelines. Bell, pipped to the substitute’s role by the more versatile Brazier, told the audience: “I thought I could just sit back and enjoy the game but it was horrible, absolutely horrible. The relief at the end was something else, though, and I remember Andy Gray and John Richards running down Wembley Way with the cup afterwards.”

Paul Bradshaw, currently in poor health, was revealed by his room-mate Palmer to have been a ’40-fags-a-day man’ who would gamble on two flies climbing a wall. “The waste paper basket in our room would always be full of lager cans,” he said. “But Brady was a top keeper and an excellent trainer.”

The story was corroborated of a fashion by Berry, still a smoker and still a regular Sunday lunchtime visitor to the Bob Hazell household. He told how he and Bradshaw had frequently done ‘the one-fag walk’ round the pitch before matches when they played together at Peterborough near the end of their careers.

No-one seemed to relish the occasion more than Gray – and his tap-in 66th minute decider sparked cheers that drowned out the commentary of Brian Moore. Not that the striker was totally prepared to let bygones be bygones.

“He and John have just been battering Willie and me for not feeding them enough good balls,” Hibbitt said. “But those League Cup finals were two of the toughest games I ever played in.”

Carr, just past his 30th birthday come March 15, 1980, recounted how he had been advised by Scotland team-mates not to let the Wembley occasion pass him in a flash but to take it all in and remember it; something he was delighted to be able to do.

And for Eves, who was roundly praised for pulling the occasion together and doing so much in his year as president of Wolverhampton Rotary Club to raise money for local charities, success beneath the twin towers was something else. 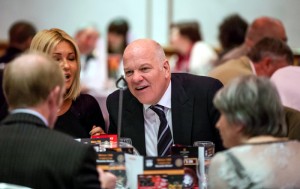 Referring to Richards as ‘God,’ he said: “I was still at school when the club had won the League Cup in 1974 and some of these guys here were my heroes. I stood on the North Bank from the age of seven. So to win a final with Wolves was absolutely wonderful.”

Gray’s declaration that the players felt privileged to have delivered silverware to Molineux was followed by the promise that the group would be up for reuniting once more in seven years’ time to mark the 40th anniversary.

With that, we were nearly done, except for one important tongue-in-cheek message: “And now for that reminder…….if you can make plenty of noise if you’re leaving after midnight.”

* Sincere thanks to our friends at event organisers Route 39 and iShootYou for the kind and prompt provision of photos.