Crack Keepers Face To Face On Our Screens 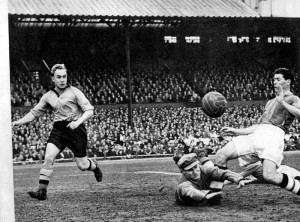 Inspirational but hardly the safest way to make a living……Williams dives at the feet of Chelsea’s John McNicholl.

It’s not just at Wolverhampton Wanderers that Bert Williams became so loved and admired.

Even in a town as familiar as Chesterfield is with the grooming of top goalkeepers, there was a ‘fan club’ paying homage to him as well. And a very special one at that.

Gordon Banks, another of England’s finest post-war last lines of defence, was a youngster learning his trade in the North Derbyshire town when Bert was approaching the end of one wonderful career and preparing to embark on another highly rewarding one in business.

And the Leicester and Stoke legend, who set out on the path to World Cup immortality by playing 23 League games while at Saltergate in the 1950s, reveals on our TV screens this weekend the lengths to which he went to watch his hero in action.

“He was my hero,” Banks said. “I was about 14 or 15, playing at school, and when you went to the pictures, Pathe News used to come on between the small film and the main film. I first saw Bert playing for Wolves in the Cup Final – and then when he was playing for England.

“I used to admire this guy so much. He was so athletic, so agile. He used to get to the ball in the top corner – such fabulous agility.

“When he played for Wolves at Sheffield – of course both clubs were in the First Division back then – I would stand behind the goal and watch what he did. By watching goalkeepers at that time, especially the great ones like Bert, it taught me things. He was fantastic, a great, great guy.”

Switch on to BBC 1’s Late Kick-Off this Sunday night (10.55pm) for, among other things, ‘When Banksy Met Bert’ – the reunion between master craftsman and starry-eyed fan.

The appreciation is by no means one way. The man who is perhaps best remembered for his wonder save from Pele’s header in the 1970 World Cup finals in Mexico comes in for much praise, too.

“I respect Gordon because he’s a gentleman in every way,” Bert says. “I never saw him commit a foul. He got the recognition he deserved when he got the world cup medal. I would say he is an idol for any young person to follow.”

The conversation between the two was captured over tea and cakes at the Williams abode in Shropshire and makes wonderful viewing.

“The piece was an absolute pleasure to record,” said the BBC Midlands Today’s Ian Winter. “To hear two grand guys like that in full flow was absolutely wonderful.

“Gordon came down to Bert’s house from his home near Crewe and you could tell they were thrilled to be in each other’s company.

“The feature has attracted so much interest back at the studios……I loved helping put it together and I’m sure the viewers will lap it up when it goes out this weekend.”

Banks is now 75 but remains a pup compared with Williams, who turned 93 years young earlier this year.

And it’s not inconceivable that the more junior of the two men might also have come to hurl his formidable frame around Molineux. Derek Dougan, a team-mate of his at Leicester, once recommended him to the Wolves management.

Late Kick-Off is being hosted in two days’ time by Nick Owen, who has another keeper at his side in the studio, Wolves’ Matt Murray. 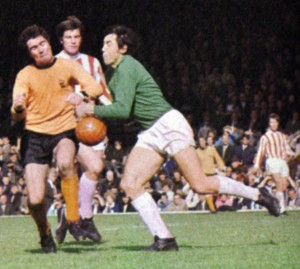 Our mission on this site is to laud the achievements of all who have worn the gold and black (and even green!) and never to belittle their efforts.

We trust no offence will be taken, though, as we reveal that filming had to be slightly delayed. Bert, who grew well used to having his facial features rearranged when diving bravely at the feet of brawny forwards, requested the brief hold-up while he was reunited with an important ‘prop’ he had mislaid – his teeth!

Late Kick Off will also be available on the BBC iPlayer from Monday morning.