Chance For Us All To Help 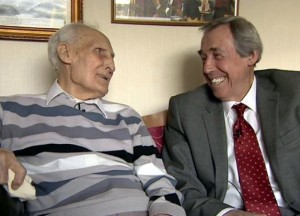 We at Wolves Heroes are following up our promotion of the delightful ‘When Banksy Met Bert’ BBC TV feature by supporting a major charity initiative spearheaded by the club’s most famous ever goalkeeper.

As viewers of last night’s Late Kick Off show learned, Bert Williams is selling off his huge collection of quality glassware in his pursuit of achieving a magical ‘goal’ for the Alzheimer’s Society.

He has already raised approaching £147,000 since losing his wife Evelyn to the disease in 2002 and is hoping Wolves supporters will help push the figure past the £150,000 mark.

The BBC1 cameras were allowed in the glass room at Bert’s Shropshire bungalow to show off a few of the keepsakes on offer – and we hope readers will join us in purchasing a piece or two to back the final push.

“The show was wonderful publicity for what he’s trying to do,” said the Molineux and England legend’s close friend, Glyne Wetton. “I have sold over 200 items from the collection already and helped him raise over £4,000.

“There are just 100 left to sell and we’re just trying to raise the last few thousand pounds of his challenge. When anyone rings, I generally visit them with about six items of glassware and they purchase the one they like. All we’re asking is £20 per item.

“Many times, they have more than one piece as they are excellent presents. Purchasers also receive a certificate signed by both Bert and Gordon. That alone is quite a collector’s item and states: ‘This is to certify that this piece of glass was part of Bert’s personal collection, which is being sold in aid of funds for the Alzheimer’s Society.'”

Banks, who himself lost his brother David to Alzheimer’s, was present at Molineux in 2010 at the 90th birthday celebrations of the man he describes as his boyhood hero. 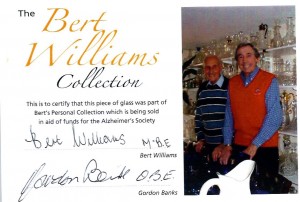 The proof of authenticity.

On last night’s programme, which is now available for viewing on the BBC iPlayer, Bert described the England World Cup hero’s famous 1970 save from Pele in Mexico as ‘probably the best I have ever seen.’

There was also a personal appreciation in the studio from Matt Murray, who spoke of his close friendship with Williams – now England’s oldest surviving international footballer.

“I have been to his bungalow several times and he’s a great, great guy; a proper legend,” Murray said. “He’s truly inspirational and used to offer me advice. He was one of the first people to ring me when I had to retire.”