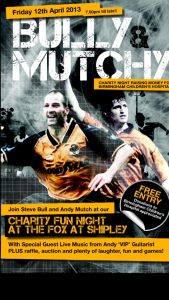 Steve Bull and Andy Mutch are back together a week on Friday for a charity function in aid of the Birmingham Children’s Hospital.

Twenty-five years to the night since the opening leg of Wolves’ Sherpa Van Trophy area final triumph over Notts County, they are appearing side by side at The Fox in Shipley for an evening of music, fun and games.

The pub, which is half-way between Wolverhampton and Bridgnorth, has landlord Neil Taylor as the main focus of the charity effort. He is also running the London Marathon next month to raise further funds.

Neil’s six-year-old daughter Kiahna has spent much of her short life in the hospital, having undergone five heart operations, the first three of which were when she was only six months old.

“Kiahna had her fifth and hopefully final operation in August, 2011,” Neil says. “Thanks to the fantastic team at the Birmingham Children’s Hospital,  she is now able to live a normal healthy life.”

Please click on to https://www.justgiving.com/Neil-Taylor8/ for further information, especially for the important details on how to support Neil in his push.

The Fox fun night on April 12 kicks off at 7pm and includes an appearance by a guitarist as well as the staging of a raffle and auction.

Admission is free but donations to the hospital are welcomed. 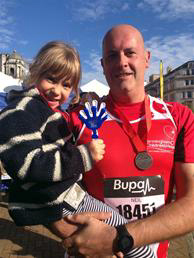 Sherpa Van Trophy nostalgia is very much in the air this spring as the 25th anniversary of Wolves’ Wembley victory over Burnley – watched by an astonishing 80,000-plus – approaches.

Bully scored 12 goals in the run and in every tie in that season’s competition except the final. It was there that Mutch stepped back up to the plate by heading in the opening goal of a 2-0 win that was secured by Robbie Dennison’s brilliant curling free-kick.